As I'm sure many of you know, Saturation is a trilogy, three albums released throughout 2017. In this post I'm taking an isolated look at the second album. I'll probably do a bit about why I prefer it over the other two at the end. 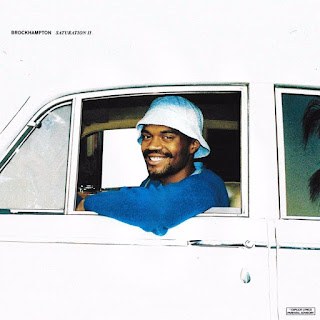 There is so much to talk about I do not even know where to start. Lord help me. This Pigeons & Planes video really got me interested and mostly intrigued about what a group with this many active members could possibly be doing. This was quite shortly after the release of Saturation II and so I dived right in. I don't think that's something I would wholly recommend. There was a lot of the album that went straight over my head on first listen but enough that stood out (mostly courtesy of Bearface) to make me want to try it again. And so I did again, and again, and again.

I still don't know where to start so I'll jump straight in with those Bearface tracks that initially sucked me in, 'JESUS' right slap bang in the middle of the record featuring just Kevin Abstract and the aforementioned Irish singer, and the unforgettable album closer 'SUMMER' which see the vocalist go it alone. For anyone listening to Brockhampton for the first time these are by far the group's most accessible tracks (on Saturation II at least). They're both love songs verging on ballads with an undoubted root in pop. I guess they're the kind of songs that you'd want someone to write about you. They're also the kind of songs that shouldn't really work in the context of the rest of the album but they both fit seamlessly and I think that deserves a hell of a lot of praise.

"So what's the rest of the damn album like if it's not like this?" Well, it's fast paced, it's erratic, it's hectic, and it's complex. Saturation II's opener 'GUMMY' storms out the traps with all of Brockhampton's rappers offering a verse alongside a glimpse of the earwormingly catchy hooks that seem to just pour out of the group throughout the album. Structure-wise, the following track 'QUEER' is similar but it's these incredible choruses that set all of the songs on the album apart. In a world where so many rappers have to dial-a-chorus from "upcoming female vocalist" it's refreshing to see a collective that can literally do everything themselves - and we hear this again on 'JELLO'.

A truly unsung hero of this group and this album is Joba. He adds these really subtle yet affective vocals on the outros of both 'JELLO' and 'GUMMY'. I guess you probably wouldn't notice if these outros didn't exist, but the fact they do really make these songs feel complete. During one part of the Saturation Documentary, Joba quite defiantly says that he's not a rapper but his verses on both 'SWAMP', 'TOKYO' and definitely on 'SWEET' nigh on prove that to be false. 'SWEET', actually, I think is a super important moment on this album. This is the pop song where any doubters could no longer possibly claim that Brockhampton aren't a boyband. The chorus is catchy as fuck, and each member sounds unique and brings something that's truly their own to the table. Alongside Bearface, on Saturation II, Merlyn Wood maybe delivers my other favourite verses and his section on 'SWEET' is possibly my overall Saturation highlight.

Brockhampton definitely helped me come to the conclusion this year that I prefer hip hop generally when it's not taking itself too seriously, which I think is totally fine, that's just when I enjoy it most. So naturally, tracks like fan favourite 'JUNKY' and 'FIGHT' aren't my favourites on the album but both of them are undoubtedly worth highlighting. These songs deal with important predjudices and social issues, Kevin Abstract discussing homophombia and Matt Champion rapping about rape culture on 'JUNKY', whilst Ameer Vann talks racism and racial prejudice in a really comprehensive manner on 'FIGHT'.

"So why II over I or III?" Saturation II was the first album I listened to and more often than not the first tracks I hear from any artists I end up becoming a long term fan of tend to be my favourites. When I did go back to Saturation I found the songs overall quite hard to connect with; the album just didn't make as much sense to me as II does. I'm slowly learning to like it now, with the exception of 'GOLD' and 'FACE' which I liked pretty much instantly. Justifying my choice of II over III is a little trickier and I guess it's probably just a time-span thing. I love a lot of the songs on III most notably 'BOOGIE', 'BLEACH' and 'RENTAL', but I think overall maybe Brockhampton's third effort this year doesn't hit the seamless mark quite like their second album does.

There's so much in terms of design and aesthetics that I haven't even touched on including Roberto's skits throughout the album, the track titles throughout the trilogy and the artwork. Everything mentioned in this post only begins to highlight that Brockhampton is so much more than a boyband. It's a movement.

Email ThisBlogThis!Share to TwitterShare to FacebookShare to Pinterest
Labels: album of the year 2017, Best of 2017