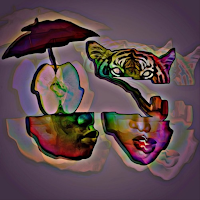 Hi hi everybody, it's been a little while since one of these, huh? That's meant that I've essentially culled quite a few songs that I wanted to give individual posts to, and I've also grouped a couple together and hopefully they will go out at some point this week. I wrote those sentences on Sunday night... it's now Tuesday evening and this is the first from anybody has heard from me. Newsflash: Nobody is shocked.

My first track to start this new Spring era is from a guysI had quite literally never heard of prior to this track appearing wherever it appeared. Amir Miles is a 21 year old self-professed "independent alternative R&B artist" obviously from America. I haven't seen anybody else I know talking about his single 'Bad Habits' either, which I thought was strange because this is a very good yet straightforward RnB/pop song. I personally really like songs that are just about normal standard things without the overuse of metaphors. 'Bad Habits' does this really well, summed up in the chorus where Amir Miles basically sleeps with the girl he's having relations with's friend whilst she does the same to him just so that they get a reaction out of each other.

Miles claims that he has new music coming soon and it's "bigger than 'Bad Habits'". That's a pretty hefty statement considering how good this song is but I'm willing to put faith in it. Sidenote: This artwork is really cool.