Tips For 2018 - The Venn Diagram Strikes Back

Hello, and welcome to the third annual Tip List Venn Diagram. This year I welcome back four returning tip lists to the image itself - as always the BBC Sound Of long list and MTV Brand New's picks, but fitting tightly back in to the frame are the BRITS Critic's Choice Award nominees and the mammoth Vevo DSCVR list. 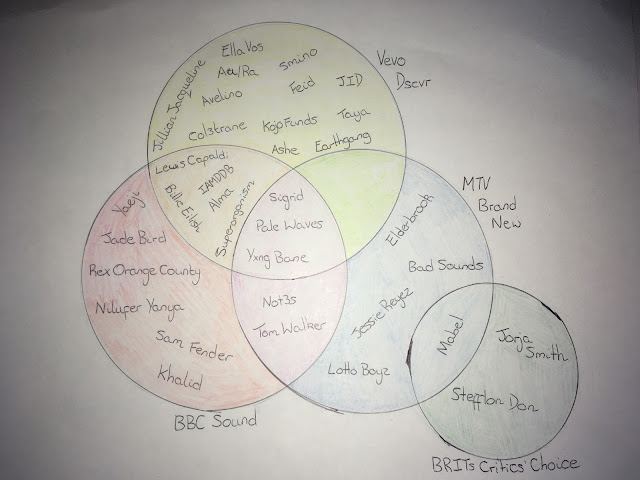 This year's esscentral picks (geddit? essential and central... never mind) are Sigrid, Pale Waves and Yxng Bane who appear on all three lists. This time last year Sigrid did not exist. Okay, well, she did, but not to any of us. Then boom one Friday in February she was everywhere. Island Records hyping and plastering a then 20 year old across every digital store and streaming service making her impossible to ignore. With all that in mind it's a bit silly that Sigrid is "one to watch" for 2018 because we're all already looking. Dirty Hit signing Pale Waves have made a stamp during 2017 as almost the female-fronted answer to label mates The 1975, whilst East London rapper Yxng Bane's UK top ten single 'Bestie' sees him claim a spot amongst the most tipped for the year ahead.

The BRITs Critic's Choice nominees are never usually ones to highlight over the other artists featured in the Venn but on this year's diagram they are definitely a source of interest. First and foremost, these illusive critics have chosen not one, not two, but three women who all happen to be women of colour. This follows last years all-white cast of nominees Rag'n'Bone Man, Dua Lipa and Anne-Marie, and 2018 is the first year to see no men nominated at all since the award format's inception back in 2009. So that's all well and good, but now we get to the interesting bit. As you can see, Mabel is the only one of the three  appears on another list this year but you'd be fooled to think this is an oversight on everybody else's part. Mabel featured on both the BBC Sound and Blog Sound (R.I.P.) polls of 2016, Stefflon Don appeared on the BBC Sound poll and MTV Brand New's list for 2017, and whilst Jorja Smith was also picked for last year's BBC Sound poll she was also tipped by Apple Music for 2017. All three artists are definitely still "new" in the grand scheme of things and the trio will undoubtedly have impeccable success throughout 2018, but it's hard to deny that the BRITs aren't really opening anyone up to anything they haven't heard over the last six months.

Of the 32 unique artists in the diagram above an overwhelming percentage are solo acts. 85%, in fact. There are only five acts that feature more than one member on this diagram which is pretty insane. It also highlights our next big problem; where are the bands? I hate to go all Louis Tomlinson on you but the unfortunate dismissal of rock and indie persists for yet another year and is actually ignored in its entirety in the outlook for 2018. This isn't a massive surprise where MTV and the BRITs are concerned, but it's undoubtedly a problem for the BBC and it's a shame looking at Vevo who have been sure to include a rock band for each of their past years. But overall, 2018's Vevo Dscvr list seems to miss the mark a little, which, as someone who looks forward to their list every year, is quite disappointing.

On we trot to issue number three. There is an abundance of black representation across the board on these lists, and most notably courtesy of Vevo with seven of their 20 artists being of black origin. This is clearly not the problem. Last year, on this episode of Tom Aspaul's Bottle Pop podcast (sorry, it doesn't appear to be on Apple Podcasts right now) Leo Kalyan explains that it's all well and good that there is all of this black representation but what about everybody from every other ethnic background on the planet? Without delving deep into the family history of everybody on this list Yaeji (Korean-American) and Superorganism vocalist Orono Noguchi (Japanese-American) are the only other obvious people of colour. As things go, I guess this is far more inclusive than one may expect but the genres spanned by the black artists on these lists aren't particularly vast by any stretch of the imagination. At this point I would actually like to highlight Vevo's inclusion of Colombian reggaeton singer/songwriter Feid which is quite the curveball but does make sense given reggaeton's surge in popularity over 2017.

Let's end on a high; who am I pleased to see on here? Both Alma and Billie Eilish are artists I feel very strongly about and it's no doubt that they will both have whirlwind 2018s - I'm hope for a debut album from them respectively too. I'm quite the fan of Au/Ra but I'm concerned this tip from Vevo has come just a little too early. The teenager has a huge amount of potential but I don't think her songwriting capability is mature enough yet to rub shoulders with some of her tip list peers. This was the first time I'd listened to London based eighteen year old Col3trane and of the artists I hadn't heard much (if anything) from before, he was the one I thought could be the most exciting. The one other act I was very pleasantly surprised to see upon MTV Brand New's list is Bad Sounds. The duo put out two really promising EPs last year and their peculiar electro-indie-pop brings something a little fresher to the table and doesn't seem to take itself too seriously.

But I can not let one glaring omission from this diagram slide. Where are Brockhampton? The California based boyband are my one and only tip for TWENTYGAYTEEN, and putting my stan level to one side, I can't really understand why UK (and global, to be honest) publications don't seem to be paying them any attention. Off their own backs in 2017 the collective released three entire albums, each one building and improving on its predecessor, they're playing sold out shows across America and they're working on a feature length film. If this isn't boybands, pop music, hip hop, and gay representation in music flipped on it's head then I don't know what is.
---
BLOGLOVIN / TWITTER / TUMBLR / INSTAGRAM