The Hunna - We Could Be

Way back when, a couple of years ago now, there was a band called Alaska Campus, but you wouldn't know it. Almost every trace of their existence has been wiped from the internet. There are still a few bits but not the juicy stuff. Alaska Campus used to have a song called 'To The New Year' and it was one of the first songs I ever posted when I started WIIHAMB on Tumblr, and it was so incredible. I have absolutely zero recollection of what it sounded like but I can remember nothing other than it being amazing. Alas, I'll get over the fact that I'll never hear it again and move on. Move on just like some of the members of now defunct Alaska Campus did to The Hunna. 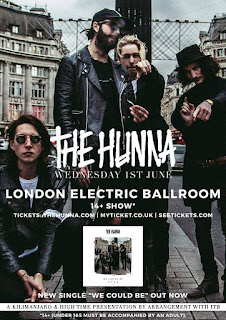 I can't speak for anyone else, but The Hunna seemed to apparate (yeah, you know, like out of Harry Potter) out of thin air towards the end of last year and have been slowly taking over my Facebook feed ever since. I don't know who is behind this band's marketing but what they're doing seems to be working. The only shows this four-piece have played as The Hunna have been supporting Coasts on their UK tour in October, but off the back of that they've sold out three consecutive nights at Boston Music Rooms in London. That's nuts. And then if that's not crazy enough, they've just announced that they're headlining Camden's Electric Ballroom in June. What? This band's catalogue currently only consists of five songs in the public domain. Am I missing something because this isn't normal.

Speaking of songs, The Hunna's new single is called 'We Could Be' and it's also accompanied by two B-sides, 'Be Young' and 'The World Is Ours'. These three tracks work well in a whole release type scenario together because they're all fairly "fuck you", but "fuck you" in context rather than just "fuck you because we say so". 'We Could Be' is probably a song with lyrics that every band at some point in their career could relate to and that's cool. It's catchy too, man, I get why the kids are into this. You know those teenagers that were suddenly really into The 1975 when they started getting played on the radio. This is music that is perfectly aimed at them, and that's not a bad thing in the slightest.

The Hunna are also the first band I've seen upload their music video directly to Facebook and only Facebook. Initially this seemed like an absolutely ridiculous idea, but when it's a sponsored/promoted post and I personally can't scroll through my timeline without seeing it, maybe it's not so bad after all. The funny thing is that they can boast that the video has 2.1million views... well sure, but doesn't a "view" on Facebook count as anything after 3 seconds of watching? So make of that what you will. Apparently you can get Facebook videos to embed on other sites now, but I'll believe it when I see it because I can't get the bastard thing to work.