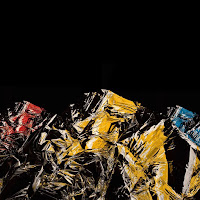 Hi Kudu Blue, bet you thought I'd forgotten about you, didn't you? Well, I wouldn't dare. Kudu Blue are a (now) four-piece band from Brighton. I can't quite recall how I first stumbled across them last year, and yeah sure, I could go back and have a look at my post about their single 'Vicinity' but I'm totally not about cutting corners like that. Also, if I had, what would I have written here? Anyway, after a three song string of singles last year the quartet have done a similar thing for 2017 but they've smushed the three new songs together and called it an EP. It's all the rage. Although, three tracks of less than 30 minutes don't actually constitute as an EP when it comes to online music store style guides, so technically this is, as JoJo attempted to coin, a tringle... but let's not get bogged down in semantics.


'Sugar Lemz' is Shaded's opener. "Lemz" is the kind of word that makes me feel a bit uneasy so I kind of just pretend that's not what this song is called. I think Kudu Blue sound a lot less like "a band" on this EP and much more like... "a project", and 'Sugar Lemz' almost throws you in at the deep end with that notion. I've had six weeks or so to mull this track over and I've decided that it would actually fit better as an interlude type situation on a longer release rather than A Single. Either way, it's cool in terms of giving us a taste of a "different side" to Kudu Blue.

But 'Drink Alone' is really what I've been waiting for. It's a big emotional RnB/pop banger that builds upon the singles the band were releasing during 2016. Something about the introduction is strangely reminiscent of the sea... is this intentional because Kudu Blue live near the sea or am I doing the classic GCSE English teacher thing of reading way too far into things? Who knows. We're all well aware that I am a fan of relatable songs, and 'Drink Alone' is just that. Pining after someone and not wanting to have to drink on your own. We've all been there, right? This one is my favourite.

I'd like to, at this point, mention how good Clementine's vocals are throughout this entire EP, and also the production and overall feel of these three tracks is pretty flawless. These things shine through on final track 'Enemy'. 'Enemy' builds in this super subtle and effortless way, which is quite an exciting thing to pull off considering Kudu Blue record and produce everything themselves in their home studio. This band are just really good, you know?


Kudu Blue are playing The Great Escape next week, on Saturday afternoon which is a stark contrast to the 2 A.M. slot they played last year. It'll be a great time.