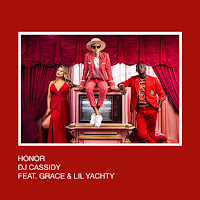 DJ Cassidy, he's a singles man. You remember DJ Cassidy's previous singles, right? No? Really? Let me give you a quick recap, a refresher course if you will. Cassidy's debut was 2014's 'Calling All Hearts' - a Robin Thicke and Jessie J cash grab collaboration. It charted at #6 in the UK, which is to be expected given the shit show that the general public seem to put on at all times. This song is not good. The follow up, released in the same year, was 'Make The World Go Round' featuring R. Kelly - an artist whose music people definitely don't care about in the 2010's. It sounds just like part two of the last song, and is therefore not good. That was the last I'd heard of DJ Cassidy, but it appears he's released two more singles over the last two years! First there was 'Future Is Mine' with Chormeo (and later a version with added Wale), but it'll come as no surprise that this is the same song again! His most recent effort prior to now was a track for HBO series Vinyl, the song being a collaboration with Jess Glynne, Alex Newell, and Nile Rodgers. You're expecting a banger right? Wrong. It's just a Chic tinged edition of that same song from Cassidy's last three releases.


So I know what you're thinking, this guy has released four underwhelming similar sounding songs, can he really be fifth time lucky? Well, the answer is yes. Yes he can. Although, I say this but I'm not sure how down to DJ Cassidy that is because honestly, Grace is the star of this show. In terms of instrumentation 'Honor' is stripped back right up until the first chorus, and even after that, it's still the Australian vocalist doing the majority of the work. Grace's voice is packed with attitude on every word she sings and it really shows on 'Honor'. In fact, it shines through so much that I am lost on why so much of her debut album felt... muted in comparison. The other featured artist to be found on 'Honor' is Lil Yachty, who is very hit or miss when it comes to collaborations but he gets it just right on this track. I can't work out whether that is down to this song appearing (and possibly being written for) The Get Down Part II or that's just happens to be a coincidence, either way, it doesn't really matter.

The final thing I'd like to praise is 'Honor's music video. Directed by photographer Sasha Samsonova who has worked extensively with Kylie Jenner and also directed the clip for Gallant's 'Talking To Myself', she has got the tone and DJ Cassidy's signature colour blocking spot on. In fact, the colours used between each scene are incredibly vibrant and the theme is so succinctly conveyed from room to room. It's beautiful. I hope this is a hit, and there's something you probably didn't think you'd hear me say at the start of this post.