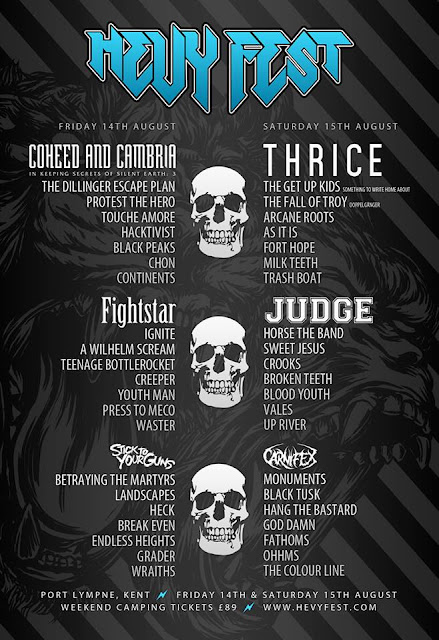 I've wanted to head to Hevy Fest for the last few years but it's just never really worked out for various reasons, this year though, the dream is becoming a reality. Boasting previous headliners including Finch, Black Flag, and Glassjaw, Hevy is now gearing up for it's sixth year at Port Lympne Wildlife Park.

There are some thing that I am obviously really excited to see: Thrice, Fightstar, The Fall of Troy play 'F.C.P.R.E.M.I.X.'. But aside from those, there are a few bands on the lineup who I have heard and/or seen before who I wasn't overly stoked about first time round. I like to give things the benefit of the doubt though and I would like to be proven wrong by the following bands at Hevy 2015.

The band formally known as Baby Godzilla have become notorious for their live show. I've seen Heck play the same stage at Takedown Festival two years running, and the first time it was very 'okay well this is kind of crazy and different' but the second time was more 'yeah I've already seen him climb up that thing'. At Hevy, I hope that proceedings will be more interesting because (I assume) Heck will be in a tent and big tents are very different to small rooms at a university SU.

This Brighton five piece who have been "tearing up Warped Tour all summer" only have three UK dates booked for the rest of 2015 and Hevy is one of them. No matter how long I stare at the line-up, As It Is still seem like quite a peculiar booking compared the style of the other bands surrounding them on Saturday's main stage bill. I think it will be really interesting to see the crowd that turn out to watch the YouTube star fronted pop punk band. And although I can't say much for the rest of the album, I do really like 'Dial Tones' and I'd like for this to be good live.

I'm never really sure whether it's cool to say that you like Fort Hope or not (not that it rrrreally matters, but it's cool if people thing you're cool, right?). The uncertainty mostly looms around the fact that the now trio were born out of the band that were My Passion, and two years into Fort Hope's career I'm still not sure they've been able to shrug off their past. As shown on the band's most recent self-titled release, their songs are much more intricately and intelligently structured than many may expect. I was told back in 2013 that to really get Fort Hope I needed to see them live... it's probably about time I do that.

Creeper have this song right, 'Gloom', which sounds so much like Blink 182's version of 'Another Girl, Another Planet' and I can't get past that. But I want to. My friends like Creeper and I want to join them and also like Creeper. Less than two months ago the Southampton five-piece announced that they'd signed to Roadrunner Records which is pretty big. Listening to their debut self-titled EP again, I quite like 'VCR' and I hope they play this one, it sounds a bit like Alkaline Trio, and I really like Alkaline Trio. Tipping Creeper to be my pleasant surprise of the weekend.

I definitely wasn't the only one who was a little surprised back in April when young Glocestershire punk upstarts Milk Teeth signed to long-running US label Hopeless Records. I fear that Milk Teeth might fall into this trap where they become a quota filling band because their bassist/singer is female, which isn't that cool. What is cool is seeing a band of this size and genre filling bigger and better festival slots. I've seen Milk Teeth once before, and I'm not really into the whole grunge/punk thing but I'd like to check out this four piece again in a setting that isn't a tiny room in Shoreditch on a Monday night.


In addition to all of that, I'm really looking forward to seeing Press To Meco again, and both Blood Youth and The Get Up Kids for the first time. I listened through to The Get Up Kids' 2009 album 'Something To Write Home About', which the band will be performing in its entirety at Hevy, for the first time last week and I definitely did not hate it.

I'm also really excited to go to a camping festival of this size this year. I mentioned in yesterday's post that I'm usually at Redfest this weekend of the year, but unfortunately the festival is taking a year off. I really love the atmosphere at these small festivals, it's almost indescribable, and I'm so glad that Hevy is going to fill the void for 2015.

Let me know if you're heading to Hevy, or if you've been before, let me know what to expect and what I should check out.


You can purchase weekend camping tickets for Hevy right here for a mere £89.