Come tell me how original that title and this whole concept is, I'd be stoked to hear it. 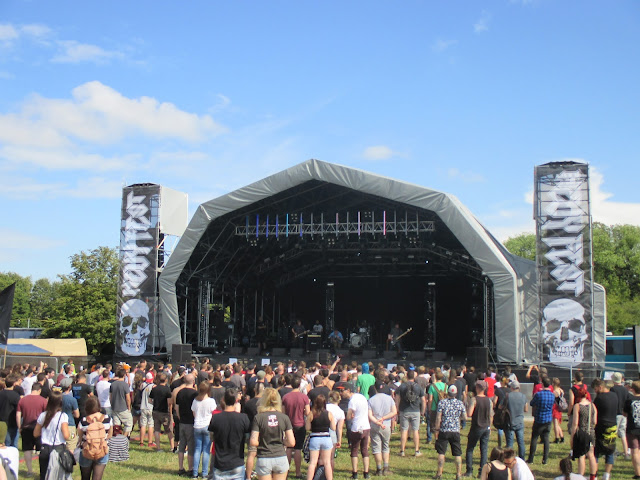 Last weekend I went to the South East's heaviest camping festival, Hevy Fest at Port Lympne Wildlife Park. *BOAST ALERT* This was my first festival with an actual "press pass" which is super cool but also pretty daunting especially with my first two interviews ever. It was my first time at Hevy too which was exciting. Lots of firsts. I mentioned Redfest in my preview and festivals this size, under 5000 attendees are my absolute favourite types of festivals.  As I just hinted, there will be a couple of interviews going up soon but in the meantime the real question is: How heavy was Hevy?

No more than ten minutes after pushing in my final tent pegs, the heavens opened and the only real rain of the weekend started pounding down. So much so that the storm warnings in place meant that Thursday evening's proceedings were in jeopardy. With this in mind The Gospel Youth took to the stage early for their first festival performance as a band. Performing as a trio, the band pulled off faultless acoustic versions of tracks from their recent Homesick EP as well as Sam Little rounding off with a solo acoustic version of Limp Bizkit's 'Break Stuff'. You've actually never heard anything like it.

The Lion and The Wolf - Heavy Handed

That sounds bad, but it wasn't, Thomas George A.K.A. The Lion and The Wolf was just playing with a broken wrist. George said himself that his set was going to go hand in hand with the weather, playing a string of melancholy dark moody songs, but they were good though. And it's the sort of thing that I expect from an acoustic set and I'm totally okay with that because on nights like this one, I wasn't ready for another curveball.

It's two o'clock(ish) on Saturday afternoon and Press To Meco are about to take to the second stage and the tent is FULL... well not full full, but like pretty full, like almost full and definitely a whole load more full than you'd expect at this time of day. And essentially the Crawley/Croydon trio were EXCELLENT, like really good. Those harmonies and other various musical things that they do well were all very good. Their set even included a new new song, I didn't make notes so I've no idea what it's called, but it was good. 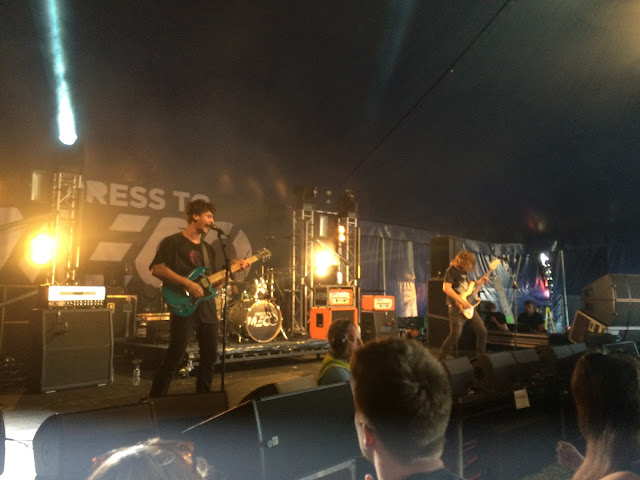 And that's all on me. I had nnnnnnooooooo idea that A Wilhelm Scream did the music that they do. It transpired very quickly that I'd clearly never listened to this band prior to seeing them before my eyes and I wasn't prepared. Despite my internal confusion, I really liked it. Good punk rock but with intricate guitar lines, would see again with correct and adequate preparation.

Let's be honest, from a logistical and technical standpoint, it wasn't going great for Fightstar. They arrived on site an hour later than scheduled, they were about 15 minutes late to start their set and then about 15 minutes later there was another technical hitch. With all that aside, Fightstar were thoroughly enjoyable, opening with 'To Sleep' and diving straight into 'Paint Your Target' it (should have been) full throttle from the outset. The quartet debuted new song 'Animal' live for the first time as well. I do have one gripe though, and that is that Fightstar close on 'Mono' which I found the ultimate anti-climax for the third time. Solid other than that.

Blood Youth were the pleasant surprise of the weekend. I like(d) their 'Inside My Head' EP released earlier this year but I was yet to see them live. Their set overall felt really clean and tight for a band this size, and frontman Kaya Tarsus' vocals were impressively strong throughout. I'd like to see this Derby five-piece climb their way up festival bills pretty quickly over the next few years.

Horse The Band - Heavy Night Ahead

So I know I said that I wasn't prepared for A Wilhelm Scream, but NOTHING, not one iota of a thing could have prepared me for Horse The Band. Even thinking back to it fills me with nothing but confusion. A band who didn't have any merch because they're "not a business" yet have one guy in gold hotpants and another in a pink Adidas two-piece chiming a triangle every now and then prancing around the stage. It wasn't for me and I didn't get it. Maybe if I'd managed to smuggle more ciders into the arena I would have enjoyed it more... but probably not. 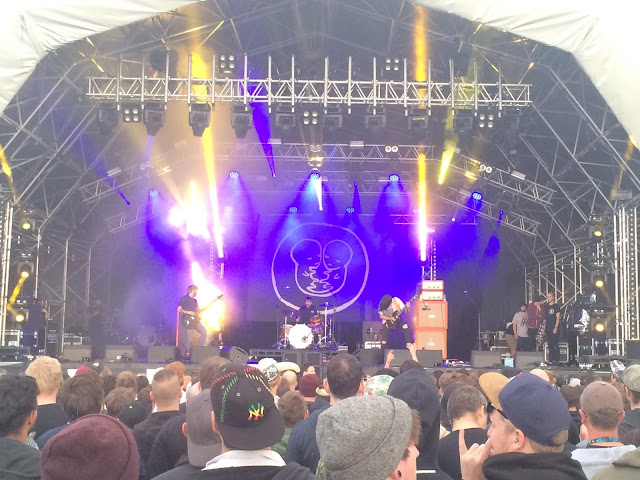 The Fall of Troy - Heavy In The Day

There were very few things I needed in my life more than to see The Fall Of Troy play 'F.C.P.R.E.M.I.X' live. Very few things. It was their second album's tenth birthday to the day last weekend and that is why the trio were playing 'Doppelganger' in full. The best thing about this was that you KNEW with absolutely no shadow of a doubt that 'F.C.P.R.E.M.I.X' would be the third song in the set and obviously it was and obviously it was incredible. Hearing the whole album in full was actually fairly mindblowing. And even though The Fall of Troy aren't the easiest band to just sit back and listen to, watching Thomas Erak just shred for an hour was marvellous. (Can you tell I used a thesaurus?)

THIS IS IT. THE MAIN EVENT. IT'S THRICE. *fails for ages*
So I was super stoked, right, and I still am pretty stoked. This was Thrice's only UK show this year and if you like Thrice you should be gutted if you missed it. Opening with 'Of Dust and Nations' it was clear from the outset that Thrice were going to receive the biggest reactions for songs taken from their first two albums. The title track from their debut 'The Artist In The Ambulance' actually sent shivers down my spine as the whole (well, majority of the) crowd shouted back the words. 'Come All You Weary' and 'The Earth Will Shake' were also just as equally chilling. As with Fightstar, I have another gripe. There was no 'Image of the Invisible' and that shattered my entire heart into the tiniest of fragments. For me, the addition of that one song could have made this whole performance absolutely flawless.

I would like to conclude that Hevy did indeed live up to its name and was fairly heavy. I loved Hevy and I'd like to go back forever and always and I also have some interviews going up eventually, hopefully soon but Press To Meco wouldn't stop talking about animals so the whole thing's a bit of a mess really.