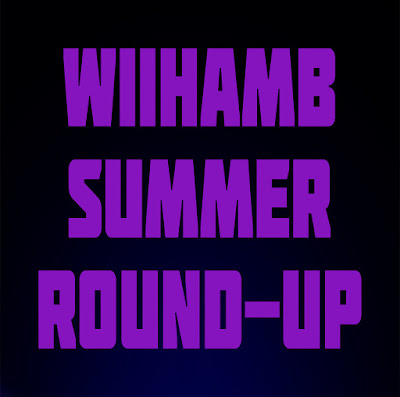 I may have made a grave mistake in not posting a July Round-Up because this bumper Summer edition is absolutely bursting with cool stuff that's happened over the last two months. There were so many great releases just last Friday, let alone the past two months. I'm also very used to Summer being filled with festivals but along with a couple small'uns this summer there have been a fair few sick shows, WHICH IS COOL.

This is going to be a whistle stop tour of Summer 2015. And I mean it, ain't nobody got time for two months worth of stuff right now. Nobody. (EDIT: I'm not even halfway through writing this and it's so long already.)


I went to three festivals over the last two months, who knew! The first was Godiva Festival which is in Coventry and it's free and it was actually really cool. This was a three day event and the amalgamation of different genres was really impressive. We only attended on Saturday evening but we got to catch Pulled Apart By Horses, Don Broco and The Wombats, which displays the no holds barred genre-wise thing quite well even though you could just stick all three under the "rock" umbrella if you wanted to. There was some chat whilst we were there about Godiva not happening again next year but even with only a few hours spent at the festival, I could tell that would be a real shame. 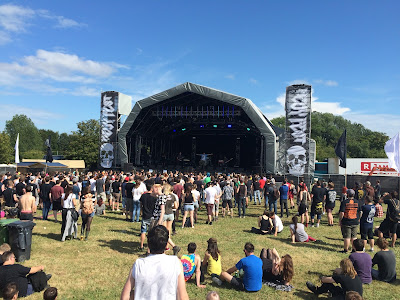 The second was Close Up Festival in Winchester, which was really more of just an all-dayer but who am I to judge? Chris and Sam who run the Close Up joint have a really impressive ear for great bands you've never heard of. If the duo were to move more further afield than Winchester they could without a doubt put on some incredible unsigned showcases. I also went to Hevy Fest. There is a review here and I've also still got my interviews to go up soon, like actually soon, I promise I'll make it happen. 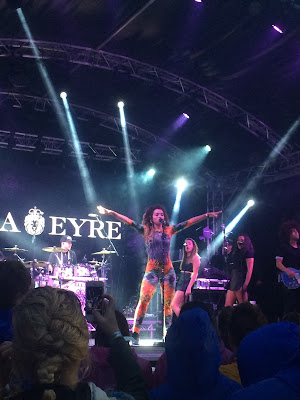 This is an insanely eclectic mix of shows so we'll just work through them chronologically. The Hell at The Black Heart in Camden went down on the day after the hottest day of the year and not even the pub's slushy cocktails could save us from that tiny sweaty as hell (HA) room. I think this was The Hell's first headline show (???) and it was super fun. AS ALWAYS. If you haven't seen The Hell live before, you should, ASAP. I saw Leon Bridges for the second time this year and for the second time in a tiiiiny venue at Notting Hill Arts Club. It was obviously really good and I am looking forward to seeing him at the not so tiny Shepherd's Bush Empire next month! My friends in Swim Good also did a little weekender in June rounded off on a Sunday evening at Boston Music Rooms. They did some new songs, which are good, maybe they'll record them one day... maybe they won't, who knows! Thorpe Park have been doing this Island Beats festival thing all summer, and on the rainiest day ever I went to see Ella Eyre. She's good and fun which was cool but the weather was a definite dampener (HA!). Finally in June I saw Leo Kalyan, it was a free show, I was kinda psyched, but... it was pretty meh to be honest... not sure I'd go again...

The two July shows in this particular section were GR8. So first, BB Diamond played a Vice House Party thing at Old Blue Last, and this was such a strange night for me, I actually #canteven but she was so cool. Think Katy B/Jess Glynne/girl you just wanna hang out with but actually does really great pop songs on the side kind of vibe. 'Instinct' is the only song that BB Diamond has put out so far and I am so looking forward to what else she has up her sleeve. Secondly, Huntar. *Deep sigh* Look, I know I talk/write/whatever about Huntar a lot, and I know it needs to stop but this show. THIS. SHOW. Nobody was prepared for what happened on this fateful Monday night at Electrowerkz. After watching this performance (a.k.a. extravaganza) I was so filled to the brim with excitement. Excitement that I'm not sure I've felt since I first heard PVRIS' 'St Patrick' last summer. This was Huntar's second live show (???) and it was... unbelievable. Did I mention that I was NOT PREPARED?! The new songs? Incredible, give me the studio versions now. The live versions of tracks we have heard? Amazing, record a live EP that I can listen to 5eva. A tour? Sort one out so that I can go to every date and have the best time. Oh my God okay, and breathe. 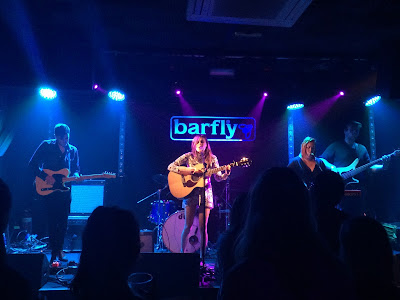 I went to three of these. Prides played The Victoria to celebrate the release of their debut album 'The Way Back Up'. It was so long ago that I don't really remember much about it but I remember thoroughly enjoying it and the album is good too and they drank lots of wine. The Gospel Youth played The Black Heart [cue more slushy cocktails] to celebrate the release of their second EP 'Empires'. I was kind of disappointed with how average this show was including main support The Autumn Ravine who I was also really looking forward to seeing. Let's not dwell. Finally, Jerry Williams played Barfly just the other Thursday and it wasn't technically a release show but she released her second EP 'Cold Beer' the next day so it kind of counts. Williams' has a much tighter live band set up to the last time that I saw her and it worked impressively well. We all know that slow songs aren't really my bag, but I still really really loads enjoyed the likes of 'Boy Oh Boy' and recent single 'Cold Beer'. Another exciting newcomer everybody should be excited about.

Albums I Really Loved and Listened To Loads

There were so many good releases over the last two months, I'm not really sure how to go about this.
MS MR's second album 'How Does It Feel' was really the only album from July that I thought was outstanding. Such a fun and well rounded pop album. Alessia Cara's debut EP 'Four Pink Walls' crept us on a bit but it's such a good showcase of what we can expect to hear from her in the future and I'm excited, she's going be even more huge than we think. Don Broco's second album was different but just because it doesn't sound like "old Broco" does not by any means mean that it's not a very good effort. I found myself listening to 'Automatic' a whole heap more than I anticipated. FTSE's debut album 'Joyless' got lost under the mammoth weight of huge releases last Friday, and although I found some of the lyrical themes throughout the album a little hard to relate to, tracks like 'This Is Life' and 'Safety Net' showcase excellent songwriting and musicianship. Finally, Melanie Martinez's 'Cry Baby' was not an album I ever thought I would enjoy but Martinez's weird and quirky songwriting and attitude come to light and make her standout as an artist that is so much more credible that most people realise. Some really dark themes running through 'Cry Baby' too, it's impressive that she's able to mask things like eating disorders within cooky pop songs.

EPs That Were Also Good

FKA Twigs has finally released a thing that I actually liked. Her new 'M3LL155X' (apparently it's pronounced "Melissa") EP was thoroughly enjoyable considering Twigs is an artist that I, on the whole, don't really "get". Maala released his debut EP which is paaacked full of emotion and excellent pop/electronic crossover tracks. This release seemed to just appear out of nowhere a bit but I'm glad I realised it had happened because it's definitely one to stick on repeat for days. Another release that sprung up on me was the new EP from Zak Abel, 'One Hand On The Future'. I need more time with this new six track release but from the initial listen this is an EP I would definitely revisit multiple times.

Albums That Were Good But TBH I Need More Time With 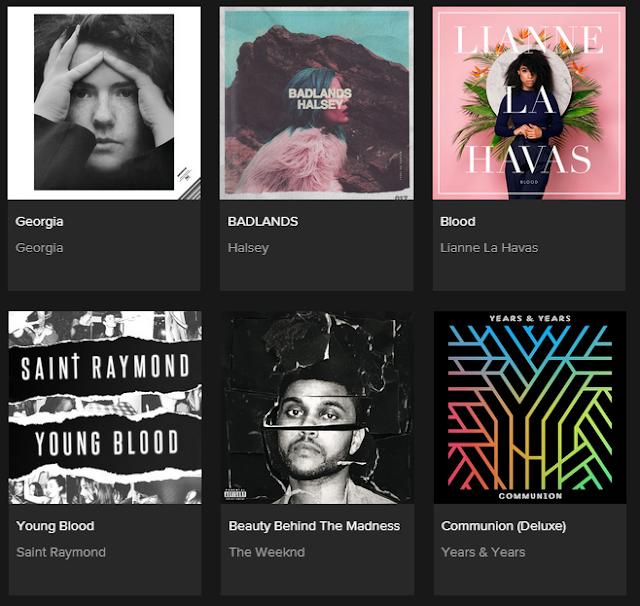 Years & Years' debut 'Communion' was good but I did have to agree a little with the NME review after my first listen... the singles carry this album for the most part and overall it's not groundbreaking. Enjoyable but nothing to write home about. Back in July I said that I actually preferred Saint Raymond's debut 'Young Blood' more than the Years & Years and Prides albums put together, but I only listened to it once, so I'm unable to confirm whether that is still the case. Georgia released a self-titled peculiar pop album and it was really good and if you're into that kind of peculiar pop thing it's definitely worth listening to. I kind of like that I have no knowledge of Georgia and what she's about whatsoever. Fairly disappointed by this Halsey 'Badlands' debut... I need to give it some more listens but I'm finding it quite samey and quite self-indulgent. Lianne La Havas' second album 'Blood' was really good for an album I didn't think I was going to enjoy, I was really impressed and I need to revisit it multiple times in the near future. Finally, The Weeknd's 'Beauty Behind The Madness'. I'm so happy that 'Often' actually made it on to this record, I was scared that it would have been left behind as just an in between albums single, but it works really well as do the other singles. But I could not off the top of my head tell you anything about the other tracks on this album because they all kind of merge into one. I found the features quite disappointing too apart from the uncredited Maty Noyes on closer 'Angel' which I did really like.

I was going to spout off some other little music related tidbits here but I've already gone on enough so I shall see you next month! (Which is only tomorrow so don' fear.)