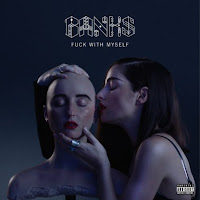 Banks must be the most inoffensive, unintrusive and legit artist out there. Man, like she releases an album in 2014 (it was one of my top ten) and then she goes about her shit for a couple of years, does this, does that and then returns with an absolute banger. All music-types should be Banks. Well, not actually be Banks, but be like Banks because she has got all of this so right.

'Fuck With Myself' is the anthem that we've been waiting for from Banks. I think a lot of people could have dropped off if her new material looked to be a straight continuation of Goddess, dark, brooding, generally quite melancholy, but this is a whole new ball game. Banks has always felt kind of untouchable, to me she has anyway, like some kind of higher being that's a hell load better than the majority of the rest of us. And in light of that, it's no wonder that she fucks with herself more than anybody else, because why would you even bother with anybody else?

The video for 'Fuck With Myself' is just as weird as you'd want it to be, featuring loads of Banks' and actual Banks just fucking with herself really because what else would you expect? I can not wait to hear more from her and her upcoming second album. You know how much of a staple in everybody's life Banks is? 102 people I follow on Twitter as WIIHAMB also follow Banks. That's pretty cool. Hope they're all as stoked as I am.