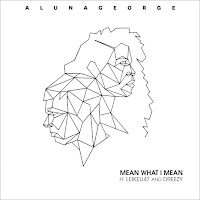 Someone needs to fill me in on what the heck is going on with AlunaGeorge because I'm not sure I can bear to be in the dark any longer. Where the fuck is George? George Reid has been absent from all of Aluna"George"'s Facebooking for almost a year (with the excpetion of one tbt post) and I for one am very concerned. I just don't really get it. Because obviously all one needs to do is take a glance at the artwork for the pair's upcoming second album I Remember in order to see that he is definitely still on. So why the illusiveness, George? What's up?

Anyway, we're gathered here today to discuss the fourth track (because where does a single begin and end these days?) to be taken from the aforementioned I Remember. The song in question is 'Mean What I Mean' and we seem to have reverted back into 'I'm In Control' territory but then steered in the direction of "generally just a lot better". Come on, Popcaan is and was the only thing holding 'I'm In Control' together. On this new cut we get a taste of two female rappers I personally hadn't heard before and this is definitely a good sound for Aluna"George".  With three women at the helm of this track it's sassy as hell, with fire dance routines, and 'Mean What I Mean' has got me so intrigued into Dreezy. Tkay Maidza vibes with a touch of Azealia Banks (obviously purely in terms of tone and delivery, absolutely nothing else).

With this, 'My Blood' and 'I Remember' (and 'I'm In Control' but whatever) in tow this second album is shaping up to be quite good, isn't it? It's out next month and I'm looking forward to it. I think I'm also seeing Aluna"George" in November at Koko. Never seen them before. Will George be there? Who knows! Let's hope so!