Is it too late into the season for a chill summer anthem? Not if you're Mac Miller and/or Anderson .Paak because they just (read: recently) released the low key song of the summer and I am ever so concerned that absolutely nobody is going to notice. 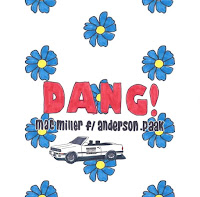 Let's be honest, Mac Miller's never really "hit it big", well, not this side of the Atlantic anyway. And personally, I haven't really given a monkey's about him unless he's been alongside Ariana Grande or since 'Frick Park Market' and that was purely for the line "I ain't no hipster but girl I can make your hips stir". Rest assured, he couldn't, but I guess he tried. Regardless, Miller's not really had a particularly rough time of it, has he? It just hasn't been for me. But dang, this is the straight up best thing this guy has ever released and I for one am extremely thankful. 'Dang!' is the first single to be taken from Miller's upcoming fourth album and hell is it a sign of good things to come... or is that just the Anderson .Paak feature talking? It's hard to tell.

If 'Dang!' alone wasn't great enough, the video is absolutely stunning. I'm not one for cinematography, heck, I had to Google the definition of that word and I'm still not sure I'm using it correctly, but this visual is one of the prettiest things I've seen this year. Despite being pretty dark and melancholy in life generally I absolutely love bright coloured stuff and this video plays beautifully on the three primary colours and injects the fuck out of them into every aspect of the visual. On first watch you don't really get a sense of the whole colour thing until .Paak's love interest steps outside their apartment, but when she does it hits you in the face like a vibrant punch and it's just so fun to watch even though 'Dang!' at it's heart isn't the cheeriest of songs but it just works.