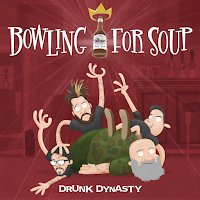 I was at work listening to the latest Bowling For Soup album. I thought I'd share my mostly painful experience with my two colleagues, Dan and Kieran. The following details the events of a taxing 45 minutes.


Natalie: I’m listening to the new Bowling For Soup album


Natalie: Lines from the BFS album, “and even in my sleep I still wanna do most of her friends”
Kieran: Oh, well, it would have to be his sleep, right? As he has limited mobility and isn’t nearly as attractive as he used to be

Natalie: Next song: “I’ve got shit to do and it don’t include you”
Natalie: “At least you’re good in bed”
Dan: Daaaaamn, leak this to the SJWs, field day opportunity
Natalie: I actually don’t know if I’m going to be able to push through the whole album
Kieran: That bad eh?
Natalie: “I’ll fix the ozone layer, I’ll cure all disease, I’ll run for president and there’ll be world peace”
Dan: HEY JARED, YOU MISSED THE ELECTION MATE

Natalie: Track Three: “she’s not your normal mom, she likes to sing along … … … TO PUNK ROCK SONGS”
Dan: Oh track 3
Natalie: “She won my heart when she fixed the zipper on my Frank Turner hoodie”
Kieran: I hope it’s a song about still living with your mum in your 40s; I’m getting that impression
Natalie: No, it’s about his friend Diane, she’s really great… apparently
Kieran: I imagine Diane is not in fact, the girl all the bad guys want?
Natalie: WELL, I can neither confirm nor deny

Natalie: Track 4 titled Go To Bed Mad
Dan: NO I DON’T WANNA GO TO BEEEED MAD AT U
Natalie: more “these are the thoughts I have when I go to bed mad”
Dan: Is this album supposed to be comedy like old skl BFS?
Natalie: HOLD ON.  “then your boobs come out and I suddenly forget what we’re fighting about”
Kieran: May I just comment that never have I been in an argument with a partner and they have just taken their shirt off, nor has it happened to anybody I know
Natalie: You just don’t know the right types of people, clearly
Dan: Yeah Kieran, that’s just cos U AIN’T JARED
Kieran: Like, they’d be pretty angry and even the insinuation that taking off their clothes may help resolve the non-sexual issue we’re probably arguing about would only further infuriate them into a blind rage
Kieran: M8 look at Jard
Dan: Jard the Lard

Natalie: Track 6 - the entire first line: “I’ve got a thing for a girl with a last name that would make you laugh out loud if you heard it with the first”. This song also sounds like 5SOS
Natalie: The song is called She Doesn’t Think That It’s Ever Gonna Work Out and I have to say I’m inclined to agree

Natalie: Track 7 is titled Don’t Be A Dick and the first line is “whatever happened to chivalry”. Read into this as you please
Natalie: “show some respect, just be a person”
Dan: ‘whatever happened to charity’ is what I read there
Kieran: The Chivalry Charity went bust, that’s why there’s little of it nowadays

Natalie: Stopped paying attention and have no thoughts re track 9. There were lots of complaints about the lyrical content of the latest Blink record because they were singing about typical teenage things, and I think that’s also the problem in a lot of this album

Natalie: Track 10: “It’s been a while since you were mine but I don’t want you to sleep with him”. Oh right, not wanting her to sleep with him is a common theme throughout this song.
Dan: These lyrics do make me kinda sad. It’s like the cries of the eternal friend zone, I’M SUCH A NICE GUY YOU GOTTA DATE ME
Natalie: IT IS! OMG THAT’S WHAT THIS ENTIRE ALBUM IS
Dan: Theme: confirmed.
Dan: No one wants to hear a guy in his 40s writing pop punk songs about the friend zone, that’s just dark

Natalie: TRACK 11 IS A COUNTRY SONG AND I DONT THINK I CAN CONTINUE
Dan: Curious turn
Natalie: There’s whistling and guitar twanging, this is my worst nightmare
Kieran: WHISTLING
Dan: ‘My baby left me'
Dan: ‘And that old red truck don’t smell the same oh na-na'
Natalie: “I had my heart broken, I had just turned 19, I never knew that a girl could be so mean”
Natalie: There’s now a “la la la” section and more whistling
Dan: He seriously needs to chill haha
Natalie: It’s called Drinkin’ Beer On A Sunday
Dan: I’d rather listen to Bruno sass on about banging than this awkward sadness from a man who should be over his teenage angst kieran
Natalie: WOULDN'T WE ALL
Dan: Trying to relate to the kids but just sounds depressed and scary, doesn’t even appear to have the comedy tone of the old songs
Natalie: Hold on now his Grandad is dying but he’s still thinking about drinkin’ beer on a sunday on his deathbed...
Dan: Loowwwng as I gawwt my beeeer, heeeyyy heeyy now
Natalie: LITERALLY, IT’S ACTUALLY THAT.
Dan: Can’t wait for the vid. Jared chewing on straw
Natalie: Christ I’m glad that’s over.

And we never heard from him ever again.