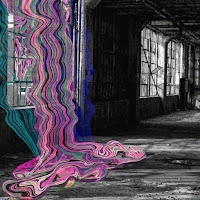 Kudu Blue are a band who are very good at what they do. The end.

Just kidding. You all (haha who? no one reads this!) remember Brighton based Kudu Blue, don't you? Good. And if you don't, you should. 'NGFM', which actually stands for 'Not Good For Me', is the five-piece's latest single and obviously it's just the next instalment in their pop/electronic crossover series. That's some terrible phrasing. That makes it sound like this isn't what they do normally. It is, and they do it really well. God, who lets me write this stuff? You really shouldn't. Maybe I start making posts a lot shorter and thus put a cap on my rambling.

'NGFM' is good and includes two sound effects you might not have heard in any other song in 2016: A dog barking, and glass shattering. What I want to know is whether that's a real dog or not and whether real glass was broken in the making of this song. Maybe I should have found out prior to writing and that could have been the groundbreaking journalism that everybody's been waiting for from WIIHAMB. Once again Clementine's vocals steal the show, especially during the pre-chorus and chorus itself. She seems to be demonstrating more and more versatility with each song Kudu Blue release. They also played their first London headline show a couple of weeks ago and it was all very good. If you haven't seen Kudu Blue yet (which is fairly likely) I'd highly recommend putting it at the top of your To Do List for 2017.