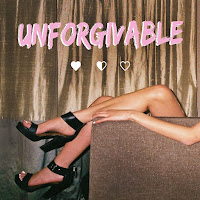 I first posted Jakil about two years ago. It was a song called 'Istanbul'. I really liked it, I still do. At the time I said that I didn't think Jakil sounded like The 1975 despite other blog types saying they did. Fast forward to Summer 2016 and I state "Imagine The 1975’s sugary indie-popness but without Matty Healy’s annoying face and pompous personality and that’s kind of what Jakil are like." Hey, what's up, hello, welcome to the blog of contradictions where nothing here makes any sense!

Jakil's latest single is called 'Unforgivable'. The second line features the word "nasty". You know everybody has a few words that really make them squirm, like, just make you super uncomfortable? Well "nasty" is one of mine, but it's all in the delivery. Jakil's delivery? Well, it's quite good. You'll recall (or you won't) my words on Youth Club AKA the UK's catchiest band ever, well Jakil are kind of like their more subtle... subtler(?) counterpart. 'Unforgivable is just as groove laden and definitely packed with hooks, just with a bit more of an overall chilled vibe. The video for this song is really cool too, one of those videos that makes you wish you had cool friends to go to cool places and hang out with, you know?