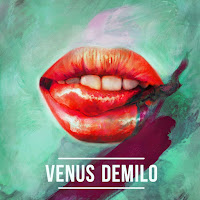 Hi everybody, I wanted to put this in the 'If You're Blogging This It's Too Late' post earlier this week but also I wanted to chat at greater length about this particular song because I think it's really good, basically. I know nothing about this... ensemble at the point in typing so let's do my favourite thing of research whilst I blog. You're in for a wild one WIIHAMB fans. (I know there are no fans, it's just a figure of speech.)

It would appear that this group is built up of four members. Venus Demilo is an odd name. Do you reckon that's somebody's real life actual name? I sure bet it's very searchable. A quick Google shows that Venus de Milo is in fact a Greek statue, one of the most famous of it's kind I'll have you know. You'd recognise it if you saw it. But this has made the band themselves far less searchable... alas, the scrolling continues. I think I actually found this track in an email, which I may indeed now refer to. (Please note, it is indeed extremely rare that I go through my emails but on this particular occasion, what a treat it was!)

Venus Demilo are a four piece from Liverpool. They have a new member; she's called Fran Fitzpatrick, and let's discuss what she's brought to Venus Demilo with their new single (released precisely a month and a half ago) 'Bite My Tongue' and how it differs, in the best way, from the band's previous singles. 'Bite My Tongue' is shimmy-worthy indie pop at it's finest from start to finish and although this starts with the guitar in the first verse, having Fran in tow with the keys and the ability to whack these vocal samples and the like in the live show I reckon would be pretty nice.

Hey, if you like my mates in Fours, I think you'll really dig this. I have pretty high hopes for this band  based solely on my reaction to 'Bite My Tongue'. They're the kind of band that would go do very well on a commercial front, on radio, getting some nice support slots and the like. Ones to watch.