Press To Meco: The Lost Interview

These are my confessions:
Okay, so I "interviewed" i.e. had just an actual chat with Press To Meco two entire months ago at Hevy Fest. Long story (it's not long at all, this is about it) short, we chatted about some weird things and went off on some insane tangents and I really wanted to do some cool stuff with that. BUT all this time on and I still haven't. But now I have (kinda) have so to wet your appetite for real life things that we spoke about, here are some... peculiar things that we spoke about:

Press To Meco are a Crawley/Croydon based three piece - consisting of Luke Caley, Adam Roffey and Lewis Williams - who have a been a band since I genuinely started paying attention to unsigned bands however many years ago. The trio FINALLY released their debut album 'Good Intent' yesterday and I thought it was probably about time I shared this with the world. As an indicator of what's happened over the past two months, here's what happened when I mentioned their album back at Hevy Fest.


You’re finally releasing your debut album! In Ocotber! That’s exciting! Because you’ve been a band for ages!
Lewis: You’re getting me fucking hyped

What’s it called?
Lewis: Err… It’s called… oh I don’t know if we can release this yet because we’re gonna do like a status with it. We’re filming the lead single video next week so we’ll have some stuff for you very soon.
Luke: Well hopefully be doing the big announcement in the next week or two so I don’t know when this…
I might put this up in like October like, “Oh they just released it.”
Luke: That’s good for us 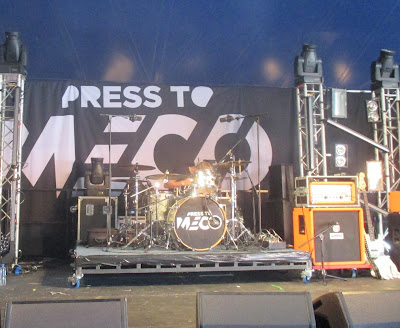 As unintentionally predicted, here we are, it's October, and the majority of things that we spoke about are now fairly out of whack seeing as it's now Autumn and festival season seems so long ago. Something that is still super relevant and more than evident from my quick chat with the guys was that they're extremely modest. At Hevy Press To Meco came out on stage to a packed tent filled with a crowd that only grew as their set played out, but when I asked about it Luke Caley said, "I think it’s because we’re funny looking, people were like 'I mean, these guys faces are so weird we’re gonna have just stay and see what they’re about'. It felt really cool. It’s amazing to see people singing along and stuff. That’s the first time I think we’ve really come out to a full tent of people and it feels like they’re actually there to watch us."

t’s probably the best sort of small festival we’ve been to, to be honest. Just as music fans we’d probably be here anyway because the lineup's so good this year." I feel more spoilt," Lewis says. "Just because you get a monitor engineer and we’ve got our sound guy with us." Luke adds,"We’re still at a stage where we play a nice set up and a nice stage. I hope we never take that for granted though."

But really, what does the album actually sound like? Lewis eventually sheds some legitimate light on the subject, "It’s more on the punkier side and it’s a lot more rawer sounding as well. You know, on the production side and stuff, less guitar tracking and drum mapping. It sounds like a band playing in a room." So they weren't lying when they said that it does sound like Press To Meco.

It's at this point that I claimed Press To Meco were becoming quite notorious for their harmonies. "Oh really? Notorious?" Luke joked. "Watch out, I’ll get you with a sneaky harmony." That's not really what I meant, but the band's vocals do set them apart from their peers a fair amount. What I actually wanted to know was whether they ever argue over who sings which part? The answer was a resounding no. Adam explains that, "Luke’s very good at working out like whose voices sound good for what." Luke continues, "That’s it, we’ve got three very different sounding voices so it’s really simple when we’re assigning parts. We like it in even spread, we always wanna keep that there are essentially three lead singers."

Despite at this point being distracted by both Black Peaks and Coheed and Cambria, I did manage to ask the most important question of all, what's your favourite sandwich filling? "Something with meat and lots of salad," says Luke. That'll do I guess...

Since I have posted this all so late, now you've had a read you can go and listen to Press To Meco's debut album Good Intent straight away. It's a great rough around the edges sounding rock album with some pop melodies thrown in, 'Family Ties' and 'Manipulate' are definitely the stand out tracks. You can find it on iTunes here and Spotify here. They're also on a short UK tour at the moment so you should probably turn up if they're heading anywhere near you.