Before we go any further, I would like to state that I am nay a fan of Grimes nor Hana. But I thought the internet's going bananas for this shit right now, so let's make a fucking cash grab for it.  (NB: This blog has earned 17 pence so far this year.) I also decided that this is something that's probably best to "liveblog" than live tweet because let's face it, everybody hates me on Twitter anyway... follow me @WIIHAMB.

So I've been watching these Chorincles, I've just gone in with the Director's Cut for the ultimate laze because I am me, nothing has happened but I've been hit with the title screen: ACID REIGN CHRONICLES: THE WAR OF ART - A Trashique Adventure. I'm kind of already done here and there's another 38 minutes on the clock. 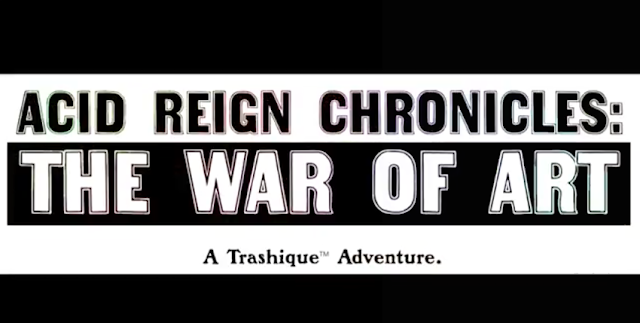 Butterfly
The pink outfit that Hana's wearing looks very nice visually in terms of colour and exposure or whatever it is that's making it pop so good. This song, though, is mixed really peculiarly before the bass comes in when the chorus happens. It kind of makes me feel on edge. This is just what Grimes' stuff is like though isn't it? I'm really hoping and also kind of expecting for all of these videos to look quite different but for the songs to all essentially sound pretty much the same. The "if you're looking for a dream girl" bit is quite good. Oh well shit that video ends abruptly doesn't it? Like no one really thought about it until it was too late and they went "well I guess we'll just have to stop it there, lads".

Underwater
This don't half sound like a bloody ballad. Dammit. Hana sitting in this tree is definitely very nice visually but it's also very boring. She also looks very good strutting down this street in this black dress in front of unnamed grandiose building but unfortunately this song is whispy and dull and not exciting. Is all of her music like this? This is going to be a long 30 minutes. 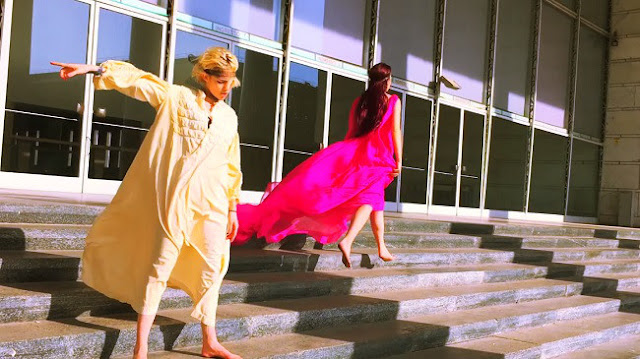 World Princess II
This guy being all "oh my God, this shot, keep going" is very correct, that shot does indeed look very good. I actually really don't have any qualms for the visual aspects of this project at all thus far.  Grimes and Hana strutting across irrelevant London bridge with umbrellas is quite iconic actually. And all of these shots in the aeroplane also look quite fun. I'm just really not a fan of this song vocally at all. There are a few subtle quirks that I like but overall it's just so not for me I'm finding it hard to take. I guess the pre-chorus and chorus are cool but I'd still probably never listen to this whilst living my life. I do really appreciate the realness of capturing London (and the UK generally) in the rain.

Shot of the plane wing in flight is lovely. Current transition between songs is also quite good. Go on Hana, hit me with some realness.

Chimera
Or bore me to sleep... either one really. The verses are definitely a lot more interesting than this whiney whispy chorus. Why are there BMXers in the background? This makes no sense. Oh right some of it is backwards? But why? This is definitely raising far more questions than it's answering. Hopefully it's time to move on soon. I'm so disinterested I'm just looking at my phone now. And I've yawned. That's the real test and I'm afraid this song failed miserably. The outro is kinda cool though, right? This vocal sampling and stuff.

SCREAM
These colours have immediately piqued my interest and I am now back in the game. Apart from I quite honestly have no idea who Aristophanes is or what she's about or which language she's "singing" in. [EDIT: She is Taiwanese, which is quite exciting actually] I do very much appreciate the subtitles below just as a concept but I literally haven't even read one line of them so do we really need them? That was all very odd. I also feel like it should have been longer. But it's over now. 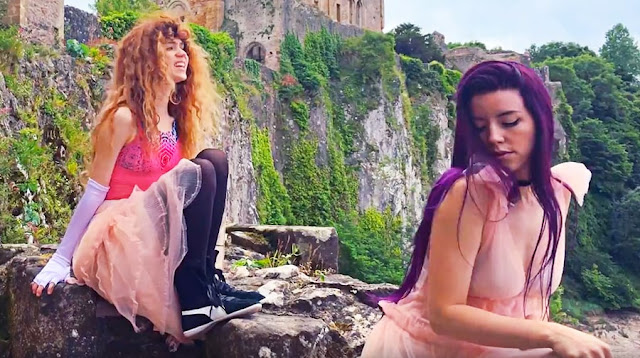 Avalanche
We are back with Hana and could this be an interesting song because this is definitely a promising start and first verse. Pray for me... and Hana. This does obviously still err on the side of too ballad for me but I think it's actually the strongest song on this project. It has real structure and I really appreciate that. It also moves along as art should rather than just spiralling or plateauing. But in exchange for a better song, the video is far less interesting/entertaining. Can't have it all though, can you?

Belly Of The Beast
Was I hasty in calling 'Avalanche' the best song on here because currently this sounds like it might edge it. Unforunately we're in the same hotel conference room as we were in for the last video so I'm not convinced. Also why is everybody wearing this same awful red jumpsuit thing? It's actually hideous, why is this happening? I'm happy to admit that my fashion taste can definitely often be safe but damn, this is too much. No, this song isn't as good as Avalanche by the way.

Anyway this song sounds like it's coming to an end and there are still another 6 minutes left on the clock so what's going on here? This is a new song... but there's no title, but this is a good song. Maybe this is my favourite? Or maybe I'm just willing this to be over so much that I think it's my favourite? No. I think this one is the best one yet. What is it? What is this? What's going on? I'm actually finding this situation quite stressful. I think I'm going to refer to this song as 'Easily'. [EDIT: I later discovered that this is an older Grimes song and is in fact called 'Easily'.]

Now what's going on? Just visuals alongside an orchestral track it would seem. Oh no, Grimes... or it could be Hana I guess, is doing some whailing over it now. It's the end. Some credits and then we're done. Has my life been elevated by these so called chronicles? No. Am I glad that I bothered to take some time out to watch them with my eyes? Yes, I think I am. Will I ever watch or listen to any of these videos or songs ever again? I highly doubt it.