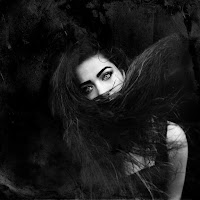 I was casually and mindlessly scrolling through accounts I follow on Tumblr the other day and I happened to catch the words King Deco. The song I posted from King Deco way back in April 2014 was called 'One' and it was long before I even started writing anything on this blog. No idea what King Deco has been up to since but it's by the by really because we're living in the now.

I don't know much about actual King Deco. I don't even want to allude that her name may not be King Deco because what if it is? You just never really know, do you? Her new single is called 'Read My Lips' and it's a very good synth-pop ditty with an extremely sassy and matter-of-fact like chorus. "Maybe you should read my lips" feels like just the right amount of condescending I can get on board with. I can see King Deco right now, rolling her eyes and side-eyeing the (presumed) boy she's talking about in this song.

I held off posting this song for a few extra days so that I could include the video. A video which is in fact an artistic collage that literally no one was expecting. I can't confirm that. I have no idea who was and wasn't expecting the clip for 'Read My Lips' to be like this or to be like anything else. Either way, it's really different to your standard music video, and also features a snake and some interesting takes on some classic pieces of artwork. It's quite clever and intricate. I imagine it must have taken a lot of planning... and I almost shudder at the thought of how much planning was involved. Props to King Deco and her co-director Aaron Dean.