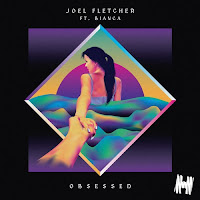 Today's three posts were all going to be combined Three Become One but... then I realised I actually had things to say so now they're all separated like.

I keep wanting to call 'Joel Fletcher' Oliver or Olivia and neither of those are anything like Joel so I don't know why that is. I was originally going to post this song alongside Kattison's 'Up and Down' but that song shook me so hard I ended up writing an essay about it. Anyway, 'Obsessed' is also a very good dance/pop record but in quite a different vein.

'Obsessed' is straight out of Ministry Of Sound Australia and anyone who keeps up with my Twitter will know that Down Under is my current obsession. Apparently Mr Fletcher is actually a pretty big deal, although clearly I have absolutely no idea about his narrative, but I am quite enjoying the fact that at 23 (ish, I guess, that's the last given age on his Facebook bio) he still looks like an Australian/surfer version of Justin Bieber with added lip piercing. And that is no slight, you do you, man. I am obviously having a tough time trying to track down a human quite simply credited as 'Bianca' so that's pretty much the end of that. It's a shame really because it's always nice to know about vocalists when they're actually credited.

This is a really good dance track, essentially, and the vocal sampling in the chorus/that bit that's the chorus but not technically a chorus is really flawless. This would be a solid 1AM vibe if you were at one of those all night events at Brixton Academy or whatever. I guess it would probably also be pretty good if you'd taken an ample but moderated load of drugs, but that is genuinely something I know really little about so I can't be too sure. Could hear this on the radio though, like it's not too "heavy" for the daytime, but genuinely will probably never hear it anywhere ever this side of the planet, and that's a shame.