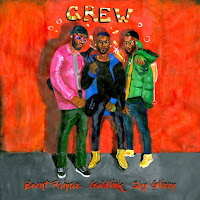 Have I ever been around for the actual inception of a Goldlink song because I really don't think I have and that is the most absolute embarrassing thing considering how much I claim to love him. This is kind of not true anyway because Goldlink put out a new track called 'Meditation' with Jazmine Sullivan and Kaytranada, which on paper looks great, but I wasn't really into it. So where does that leave us? And by us I mean this post. Well, we'll just wind back to December when the twenty three year old rapper put out his previous collaboration 'Crew'.


I've made myself sound so much worse than I am, Goldlink dropped the music video for 'Crew' a mere couple of weeks ago so this song is still totally relevant. Hell, I think all of Goldlink's music will be relevant for the rest of time. I'm properly in love with Brent Faiyaz's hook on 'Crew' though, singers with vocals like this get me every single damn time. So smooth. So effortless. And it just works, especially against both Goldlink and Shy Glizzy's "flows". This song is worlds apart from Faiyaz's solo work as well, which is absolutely wild to listen to in the same sitting as 'Crew'. I super hated Shy Glizzy's verse when I first heard it but now I find myself bopping so hard down the street when it comes on. You've just gotta learn to take this stuff not even mildly seriously. Had a chat with a girl I work with today about how she doesn't like rap, largely, because it's misogynistic. Despite how I think that's a sweeping generalisation anyway, you have to take it all with a pinch of salt - Desiigner admitted that he has literally no broads in Atlanta. Why so serious, yo?