Jakil - Every Time We Talk 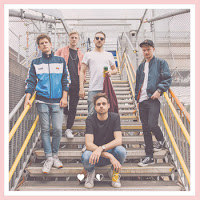 I've had a couple of weeks to really let 'Every Time We Talk' set in and settle down so I'm not crazed fan-girl for it anymore, and I'm not sure if that's a good thing for this particular post or not. I don't know if people care about my own personal narratives when it comes to new songs; I had that revelation on the walk to work this morning. And then I was like, "well, this is a blog, not a zine, and it's about me, so I'm damn well gonna tell you my life narrative like you care even if you don't." I think I first heard this live towards the end of this year and if that is indeed true I can vividly recall hoping 'Every Time We Talk' was new and not old, because that's something that's really hard to tell if you're not given any background about songs you've never heard before.


In fact, it was new (well, probably not, but new-er) and made even better by being the first track Jakil have released in 2017. Imagine I made it this far into rambling before mentioning the artist. The state of this website. Jakil are a five piece, originally they are from Scotland, but now they live in London - following that pipe dream. Somewhere amongst this prose there's a point and I think the long and short of it is, 'Every Time We Talk' is incredible and one of my favourites so far this year. Something I still can't get over is the song's missing chorus. Where is it? Which bit is it? How can a song be this good but also at the same time not really have a chorus? Someone, please, explain to me how. I'm also usually pretty impressed with Jakil's ability to right quite sickly sweet 80s infused pop songs but not make them sound wet or cliche or cringeworthy. And as far as lyric videos go, this one's pretty on the money.

They're playing a show in Edinburgh next Thursday (literally a week from right now) and they also play Birthdays in London on the 12th April. Get get it.