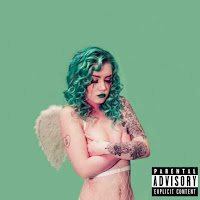 There's something that really doesn't sit well with me about kooky popstars. The "ooh look how weird and edgy I am, aren't I interesting?!" No, you're not; give me your music and take a seat whilst your audience let's you know whether we're actually interested or not. And this was my minor beef with Swedish singer/musician type Ängie, whom the Daily Star heralded “the most controversial star we’ve ever seen”, and The Sun reckoned she was “the most shocking pop star of 2016.” Get a grip. Debut single 'Smoke Weed Eat Pussy' [insert eye-roll here] and follow up 'Housewife Spliffin' aren't mildly contentious in a time like 2017, and they're not even particularly good songs.


But Ängie has turned that on it's head for new single 'Spun' and all of a sudden I am somewhat invested in her as a hero of pop music over the next nine months. Oh, for sure, I'm just as surprised as you are. 'Spun' is, as the kids would say, a bop. Despite Ängie's speak-singing and drug taking connotations still being fairly prevalent, they are supressed with this infectious (sorry) pop beat and a wild full on catchy hook. As someone with no interest in drugs I've Urban Dictionary'd the term "spun" and I am now well informed that it refers to being "under the influence of methamphetamine", and I truly wouldn't have expected anything less. I don't know how long Ängie can play on this for, but taking a slightly less in-your-face approach really seems to have worked on this track.

Ängie plays Hoxton Square Bar and Whatever-It-Is-This-Week on 5th April with Urban Cone (literally the worst band name ever) and my top mates in Fours. As Anthony said we'll see how much weed smoking she does and how much pussy she really eats. Too right. (Tickets are on Dice but everybody's keeping that very hush hush.)