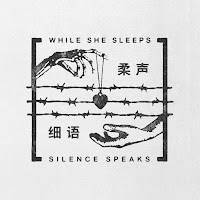 It's just over a month until the release of While She Sleeps' third (or fourth, if you count The North Stands For Nothing but I'm never sure if we're supposed to include that as an album or not?!?!) album and as I've probably stated at least three times already, it's genuinely set to be the greatest rock/metal album out of the UK in 2017. I've been thinking about how acceptable it would be to put metal on the office Sonos and I've quietly concluded to myself that anything that sounds intricate, technical and crated (Night Verses, for example) or anything that's really melodic despite it's "aggression" and double bass drum pedals (like Architects) is probably acceptable. While She Sleeps fall effortlessly into the latter with everything we've heard thus far from You Are We.


The Sheffield based band's new track 'Silence Speaks' really feels like a proper single, not that previously released 'Hurricane' wasn't, it's just that this song is bang on the money. The chorus is hooky as fuck, the pace is relentless and the backing vocal "oooh" bits are a flawless touch. The only thing 'Silence Speaks' has that it really doesn't need is Oli Sykes. A quick scroll through the comments on the YouTube video and a lot of people (read: young Bring Me The Horizon fans) have "discovered" While She Sleeps through Oli Sykes being the featured artist, which is great. However, metal's poster boy doesn't really add anything that While She Sleeps don't already have covered. Finally, I'd like to just mention how stunning this Tom Welsh & Taylor Fawcett (Get Deluxe) directed video is, even more so considering the bulk is filmed in an empty warehouse.