An Apology to Broadside and Old Bones

Why are you apologising? What's a Broadside? Whose bones are old?
I'll tell you all of the things, loyal followers, read on.

I have a friend called Jack; he appreciates good things, and these good things are usually things that I think are good too. A few months ago, Jack sent me a link to a song; I listened to it, as well as another one from the same band, and dismissed it as "generic pop punk". Pop punk, along with punk itself, are so hype at the moment, and not just in the UK and US, it's a global phenomenon. Only the other day did I see a group of humans discussing a pretty generic Japanese pop punk band. Everybody's trying it, so naturally it's harder and harder to stand out.

Last week I stumbled upon 'Playing In Traffic' by Broadside on Twitter and I thoroughly enjoyed it. A couple of replays later and  sent it over to Jack. Whilst he was taking his time to respond, I browsed Broadside's VEVO channel aaaand their other official video was very familiar. Some further research showed that since my first meeting with Broadside, the Virginia five piece had released their debut album 'Old Bones'. Time to give it a spin? Long overdue. 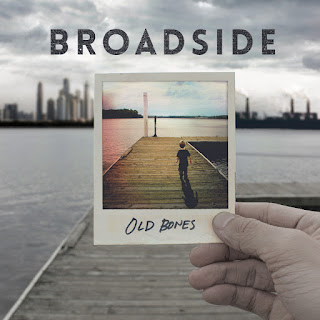 Here's where I was wrong, Broadside's 'Old Bones' is not just another pop punk album and actually Broadside aren't just another pop punk band. Okay, well on the surface this is a pop punk album and there is pop punk rooted in Broadside's core too but this is better than that. To be fair to myself, the pre-album/demo/EP/I don't know version of 'Storyteller' was the first Broadside track I heard and that version compared to the re-recorded album version is objectively not very good. Listening to them back side-by-side, I was well within my right to dismiss it initially.

There are subtle elements within this record that enhance it to something that their peers will probably never manage. Let's take a couple of other commercial sounding pop punk bands, say State Champs and Hit The Lights, and we could say in essence that Broadside are fairly similar to them. But there are things like the blatant cliche almost Mayday Parade-esque lyrics - songs about girls, sunsets and the coast; along with super sweet melodies and insanely catchy hooks which rival the likes of The Summer Set and Set It Off. Hell knows who these five guys cite as their influences because the track 'Come & Go' has everything I just mentioned as well as the final few seconds sounding like The Spill Canvas. There isn't really a low point on the album either, some other standouts include 'Damaged Kids' and 'The Simple Type'. So at around 20 listens through later, its safe to say that Old Bones will probably be one of my albums of the year.

On a loosely related note, there's something else that I want to mention. Alternative Press recently did a feature with Broadside frontman Ollie Baxxter. I say 'loosely related' because the article isn't really about Broadside, which is totally cool. What isn't cool is the title of the feature which to me, and others who I know have seen it too, gives off completely the wrong impression about the article and Baxxter. The feature is called "How to look pop punk" which is already stupid. I'm so bored of sites/zines/blogs/things using clickbait titles especially when they aren't even accurate, which is the case here. The actual article is about Baxxter's life, what he wears and why, it has barely anything to do with pop punk. Fuck sake internet.

Anyway, side track down the scenic route taken, I was wrong. Broadside are great and so is Old Bones. Can we get a UK tour please?

You can and should obtain Broadside's Old Bones here on iTunes and here on Spotify and here on Deezer. I've ordered it on CD obviously because *sunglasses emoji*