APPLE MUSIC ANNOUNCE THEY'RE DOING A THING THAT THEY WERE ALREADY PLANNING TO DO ANYWAY. 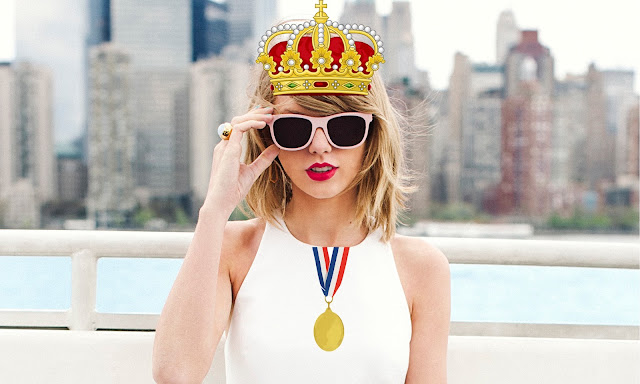 We've all heard right? Pop music hero, the industry's saviour Taylor Swift has just done the most incredible thing that the music industry has ever seen: Taking part in the biggest publicity stunt of Apple Music's short legacy.

Last night Eddy Cue gave Taylor Swift a little phone call to tell her that she'd been successful in changing everything that Apple Music had put to the press so far regarding their payments towards artists... although I'd like to think that the conversation probably when a little like this:

“Hey Taylor, Eddy here,
Just wanted to say thanks for putting that letter we wrote up on your tumblr. It’s received more attention than we hoped it would, and we’re really grateful.
I’ve already scheduled the “announcement” tweets on Tweetdeck about how we’re going to pay artists. They’re pretty vague but nobody will mind because everyone will be too hyped about you white knighting the situation to notice.
Obviously our finance department have sorted everything regarding what we owe you for this, you should see it in your account first thing tomorrow.
If you could just remember not to mention anything about the indie labels, artists and the distributors pushing back on everything we’ve said since day one that would be really helpful too.
Thanks again Taylor,
Catch you around”

What gets me is that indie artists and labels have been pushing back on Apple Music's supposed 'free trial with no payment' deal probably since long before we knew about it. Days before Taylor put pen to paper (metaphorically speaking, in more way than one), Beggars Group openly published an honest post about where they stood with Apple Music, which was that they did not have an agreement with the service. Now yes, of course, Taylor Swift has a far wider and loyal reach in June 2015 to speak out to than Beggars Group do, but it is simply not fair that she gets to walk away with all the credit. "Life's not fair, Natalie" I hear you cry, and that may be true. In essence everybody's happier now aren't they, I guess, but I believe it would be wrong to simply put down Apple's U-turn to a couple of paragraphs typed out by Ms Swift and ignore EVERY OTHER group and individual who would not agree to Apple Music's terms.

Realistically, I'll just have to get over it. We'll never know the true story, and in a year's time this will all be forgotten about... unless Apple Music falls flat on its arse but we'll see about that. Only time will tell.

Feel free to tell me what you think about this in the comments below, you won't, but I thought I'd offer you the opportunity anyway.