The UK Just Bailed On an Unmissable Farewell Tour

Boston based, A Loss For Words are retiring at the end of 2015 after 15 years together as a band. Those 15 years have seen the group release four albums, countless "so bad they're good" music videos and tour the planet relentlessly including stints on Warped Tour and numerous years at the UK's very own Slam Dunk festival - which I'm sure they've claimed is their favourite of all the festivals. This is the point where I do not confess to "being there since day one". I was seven when A Loss For Words formed and in all honesty, I didn't get into them for another ten years. It was their Jackson 5 'I Want You Back' cover featuring Four Year Strong that made my ears prick up. I mean, come on, how many bands are like "yeah we could release our second album... but instead we're going to release an entire Motown covers album"? Mmm, thought so.

The first time I saw A Loss For Words was at The Fighting Cocks in Kingston in Autumn 2012 on a Saturday afternoon with only about 30 other people. To this day, it's still one of my favourite shows ever. At the end, frontman Matty Arsenault blew my mind with something that I'd never seen anyone do before and haven't seen since. He stood at the door, thanked and shook hands with every single person who'd attended. I told him that I didn't understand what he was doing and (it was a long time ago but) he said something to the effect of "it means a lot to us that you came out otherwise we would have just been playing to no one". It was at that point that I thought this band deserved way more than they were getting in terms of... well, pretty much everything.

On Sunday they admitted themselves that they've never been "popular" and although this is true, it's heartbreaking. It was tough last year, when A Loss For Words were touring the UK with The Wonder Years, to see so many people turn up early to watch State Champs' opening set and then disappear during A Loss For Words. I have my own beef with State Champs (imagine going to three dates to see a band open each time only to have them block you on Twitter...) but it was cool for them to be getting the response they were. I just felt that it was unfair and a little unjust. I guess that's just how this industry works. 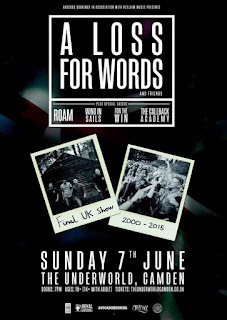 Anyway, A Loss For Words' final UK show was a few nights ago at Camden's Underworld - a head in hands emoji of a venue but whatever. Matty said they thought they'd sold around 150-200 tickets for this 500 capacity venue. They were obviously as grateful as ever. I thought it a little disappointing but didn't expect much more. What really annoyed me was that there were as close to as many people #sidestage being #SPOMB as there were in the crowd. This group was made up of their friends, crew and other bands on the tour. This is all cool and stuff but when there's so much space in the rest of the room you might as well just immerse yourself in it rather than crowding into that tiny area around the back of the stage. The headline set was cool anyway, with PVRIS' Lynn Gunn resuming vocal duties on 'Distance', great guy Gav standing in for Soupy on 'Conquest Of Mistakes', as well as cameos from Light You Up's Drew and Tom, and that guy from Roam. Even though the first time I saw AL4W will always be my favourite, this will be the show I'll tell people they should have been at for years to come. 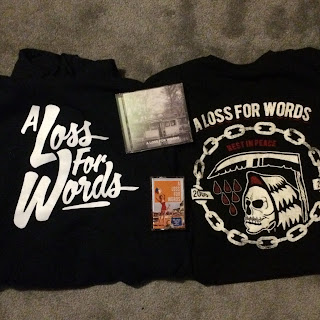 The bottom line is that A Loss For Words are one of the greatest bands on the planet right now and it's awful that by the time the year is over, they will be too. I don't know what else they could have done to be bigger than they are because there are four core hardworking members of this band, not to mention everyone surrounding and supporting them. It's just another sad story of this "industry". There's a lot of negativity here and I'm fairly sure that the band themselves don't view a lot of this stuff in the same light as I do. You know why? Because they're just genuinely nice guys. I also can't help but feel guilty myself. In the last 14 months I've seen A Loss For Words eight times (lolwut) but on The Wonder Years tour last year I only bought one vinyl. This year I spent £50 on merch but it all seems like a case of too little too late. I definitely couldn't have "saved" this band on my own but it would be nice to think that I'd done all I could.

I'm fairly against bands splitting/retiring and then reforming but I could definitely make an exception to the rule if A Loss For Words decided that they wanted to start touring again in four years time. This band deserved so much more and I'll be forever grateful for them coming back to the UK again and again and also to Matty for being so kind every time I stopped him to say hi.

A Loss For Words, you'll be missed and I really hope this isn't the last we see of you. 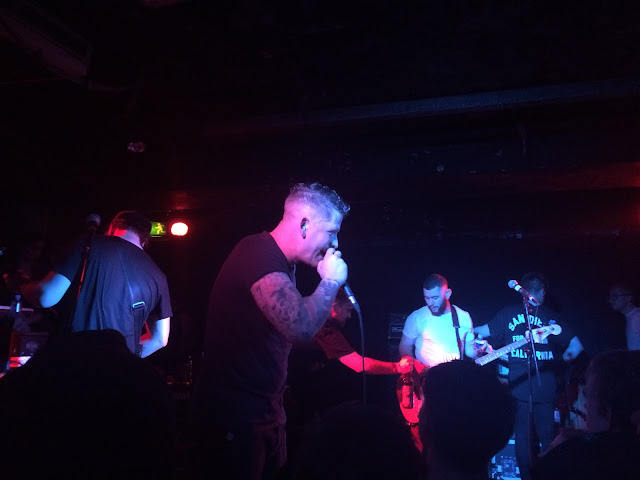