I Opened 'Memories... Do Not Open' So You Don't Have To 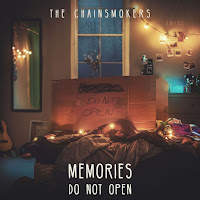 It is no secret that The Chainsmokers are the worst pop/dance music duo on the face of the planet at this point in time, and it therefore will come as no surprise to you that I am far from impressed to see that the pair have just released their debut album. The Chainsmokers are Andrew "Drew" Taggart (AKA The Singing Chainsmoker) and The Other One (AKA Alexander "Alex" Pall).  It's important not to forget that this two-piece broke out with their quite frankly abysmal single '#Selfie'. I only mention it because everybody does seem to let that slide, and it's simply unacceptable.

Let's get this torture underway then, shall we? Lord, help us all.

The first three tracks are labelled "explicit" so I'm after some really fucking good swears. Have I heard opener 'The One' before? It's really hard to tell, isn't it, because all of their songs sound so damn similar. I was correct, 'The One' was released as a single a couple of weeks ago but it's pretty lacklustre. This surely isn't something I would release just prior to unleashing my debut album. The swear is good though, I'll say that, along with what I can only assume are co-writer Emily Warren's backing vocals. However, there are some absolute nonsense soundbites that sound as though an 11 year old has gotten a hold of the pre-sets on a keyboard for the first and is attempting to impress their friends in their music class.

Sorry, is The Singing Chainsmoker going to "vocalise" on every one of these songs because I'm actually not sure that's something I'm going to be able to handle. 'Break Up Every Night' features the line "she wants to break up every night, then tries to fuck me back to life". No thank you. Then all of a sudden this song is an electro-indie band track, and it's truly one of the worst I've ever heard, no doubt influenced by co-writers Smallpools. Captain Cuts who I like very much have co-produced and co-written this song too and honestly, I expected better. A real hot mess.

'Bloodstream' opens with the line "I've been jumped three times this week", and when making music as bad as this, can anybody really be surprised by this news? This is one of those songs where the singer just moans about how tough their life is, and you're a bit like... "get over yourself, man". He continues with "I gave up three times this week", and I truly wish he was talking about his music career. He's not. Not even Phoebe Ryan can save this trainwreck.


I really wish that somebody I like as much as Emily Warren wasn't even remotely involved with The Chainsmokers. She's a good singer and a very talented writer of songs but when combined with this pair of clowns things can only get so good. 'Don't Say', the first of two tracks she's a credited featured artist on, is definitely the most bearable song on Memories... thus far but it's dumbed down with it's unnecessary chorus drop. Oh and there's a fucking skit on the end. Cancelled. Sorry Emily. Her second vocal feature 'My Type' sounds very promising... until another unnecessary drop. It's a shame really. Do The Chainsmokers think they need to do this on every song they put out? This is okay though. Thank God for Miss Warren to be honest, she's an unsung hero of so much dance-tinged pop music of the last couple of years. I could invest in 'My Type' being a single, I think, but I'd definitely need them to do some re-hashing of the terrible electronic bits on the chorus.

Hold on. Everybody, I haven't reached the chorus yet, but I think this album has a stand out (whaattt the fuck??) and I think it might be 'It Won't Kill Ya'. Track seven features vocals from Louane, who appeared on France's version of The Voice, and is co-written by serial David Guetta collaborator Sam Martin. I guess this starts off with Louane sounding a bit like Daya, doesn't it? But it's very good. No doubt the chorus will ruin everything. Right on cue. Someone needs to let The Chainsmokers know that sometimes less is more. 'It Won't Kill Ya' does have a very different sound to the other tracks on Memories... Do Not Open, and it'll come as no surprise that there's definitely a more European-EDM feel to the song but it sure is a welcome change to the monotonous drops and melodies The Chainsmokers are accustomed to. I bet The Chainsmokers reckon it's really funny that 'Paris' follows this song on the album.


With 'Honest' we're right back to square one; The Singing Chainsmoker is vocalising, there are terrible electronic noises, and a chorus so flat it's hard to even pick out. Next! I'm not a fan of Jhene Aiko but how on earth did she get roped into this? 'Wake Up Alone' is another Emily Warren co-write but it's not a patch on the two songs she sings on herself. I think I've reached a point on this album that I don't believe anybody else on the planet will get to. Seriously, ten tracks into a The Chainsmokers album, is there really any need to delve deeper?

'Young' opens with an acoustic guitar. We really don't need this, do we? I think this is an attempt to prepare us for the final track which features Florida Georgia Line. Something I'll mention, that I haven't brought up yet, is that whilst The Singing Chainsmoker has a writing credit on every single one of these tracks, The Other Chainsmoker does not, which is something I find quite interesting. I can only assume that he solely works on production, but it's a set up I think is fairly amusing. 'Young's lyrics are just a load of nonsense about things being "hard when you're young" by the way. We're here, the final track, 'Last Day Alive' featuring Florida Georgia Line. This definitely isn't the EDM-country-crossover I was dreading and that's taken me aback quite a lot, but of course it is the typical Chainsmoker formula I've come to expect over the last eleven songs.

There are not more than three tracks on Memories... Do Not Open that I ever wish to hear again. In that respect, I would strongly recommend that we're all better off keeping this album firmly closed for the rest of time, maybe holding it ajar every now and then for Emily Warren to slip out and sprinkle the charts with some good pop music before retreating to the basement The Chainsmokers no doubt lock her up in for large chunks of the year.
---
BLOGLOVIN / TWITTER / TUMBLR / INSTAGRAM