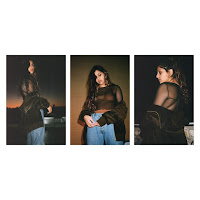 I won't lie. When do I? This is one of those songs I added to my blog queue and completely forgot what it sounded like between then and now other than "probably quite good". I don't know when I wrote those three sentences... but I don't remember doing so, so we're keeping them in for comic affect. I've spent a solid five minutes looking at WENS' social media trying to workout 1) where she's usually based and 2) where she is currently. No, of course this doesn't matter in the slightest, but it's one of those things I just like to know. All good sources say WENS is based in LA, it's just that she seems to tweet from/about London every so often and that got me tied up.


Last summer WENS put out her first track (well, according to Soundcloud, at least) 'Bones' which on a refresher listen I seem to vaguely remember, but it's got nothing on new single 'Bleed'. 'Bleed' is dark and moody and great to listen to when feeling even mildly emotional about a love interest of any kind. My current personal preferred love interest is one I am zero percent romantically involved with outside of my head. They are really fun to angrily lip sync the "don't call me baby" hook at. I'm totally living for the harmonies on 'Bleed's chorus too, I love it when solo artists harmonise with themselves on studio versions of things. I guess that happens a lot, doesn't it? It's just done exceptionally here.