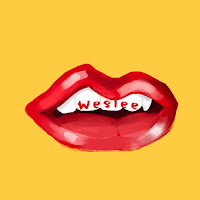 Let me tell you about Anchor. Myself and my bros Matthew and Pip (both of The Line Of Best Fit fame) have been dabbling in this Snapchat for radio like platform called Anchor. You have your own radio station where you can chat, import audio from other places, and play tracks from Soundcloud, Apple Music, and Spotify. You can also call in to other user's stations to force them to listen to your thoughts on what they're doing, as well as applaud stations that you listen to. The Anchor app is still only in it's second real iteration so the features are somewhat limited but it's definitely enough to get along with. You can find my station here. "Right, cool, but what has any of this got to do with Weslee?" I'm glad you asked. 'Gassed' was one of the first songs Pip put up on her station and I was so hyped on it that I called in to let her know... I might put that somewhere... because I'm hilarious.


Weslee actually originally put 'Gassed' out six months ago, which is some pretty poor form on everybody I know's behalf seeing as blogs, radio, and Spotify alike didn't start pushing this until about a month ago. I don't know what happened then, but as usual I'm turning up drunk to a party that everybody else has probably already got a hangover from. I've spoken a lot recently about my two favourite things in music at the moment, samples, and stripped back pop songs with tight as hell production. 'Gassed' nails the latter. Weslee's singer whose very secret name I do not know sounds super like Clementine from Kudu Blue at points, and it's taken me so long to work that similarity out I'm pretty pleased with myself. I am and quite possibly forever will be gassed - in a good way.