Hit The Lights - No Filter 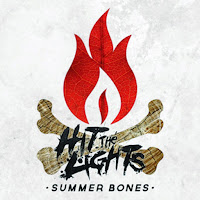 This is the only break-up anthem I need in 2016. Hit The Lights have been one of my favourite bands since about 2007 and over the course of four albums they've written their fair share of "fuck you" songs, but I think this one tops them all.

'No Filter' is one of the strongest tracks on Hit The Lights' most recent record Summer Bones, which came out last year, so yeah, I'm pretty happy that it's a single. Although, does a song from a "rock" album being a single really mean anything any more? I guess there's more chance of humans who are yet to hear the band/album to latch on to a song; but other than that you can just relish in the fact that the song has a shiny new video for everyone's viewing pleasure and it's more likely that said band are going to play the song live.

Hit The Lights live is the big deal though. Genuinely one of the bands on the planet who I have the utmost fun seeing play shows. Hit The Lights are headlining the Pure Noise Records Tour across the US through April and May before coming over to the UK for Slam Dunk Festival. The band are no strangers to Slam Dunk and they're genuinely an act I think attendees look forward to seeing every time they return to the line-up. Always such a good vibe for dancing and sing alongs. See you in the pit etc.