LANY - Where The Hell Are My Friends, and Other Things 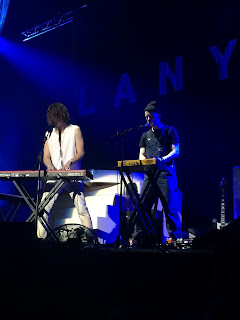 Well, would you look at that? Three months into this year and following in the footsteps of Chinah and Fours, LANY are my third favourite band of 2016. How many favourites I will possess by the end of the year is anybody's guess but right now I don't care and I'm very content with this trio.

Despite how painfully relatable the title of 'Where The Hell Are My Friends' is alone, I didn't fall in love with the track instantly, it took a couple weeks. But here I am screaming "Friday, wine and the internet" at any given opportunity. It's really insane to me that there are other people in the world who feel like their friends can be super lame sometimes, especially the "out without me again" line, and I'm sitting here like "woah, if Croydon was actually California, and London was LA this would be too real". Although I reckon I'd probably be having a far better time if that were the case, alas, my friends would probably still be pretty shit. So the bottom line is, LANY have songs with mad relatable lyrics and that's so rad.

LANY live has rapidly become one of my favourite things to see as well. And from the packed out tiny little Barfly headline show to opening the O2 Arena, we have some solid proof that these three guys are pretty darn comfortable with any stage you plonk them onto. Everything just sounds hella tight and flawless too. I wanna write something more productive and interesting than that about #LANYlive but I think it's probably just worth you going to a show and witnessing it all for yourself.