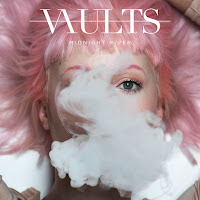 There’s something almost religious and church-like (is that a thing?) about Vaults’ new track, ‘Midnight River’. Like, if current pop acts were to write songs to be used in a new official hymn book, this would easily make the cut. Blythe Pepino's vocals are so much more powerful and interesting than I've ever given them or her credit for before and I could not be more glad that the almost gospel sounding "ooh ooh" sections in 'Midnight River' exist.

The track's video sees Pepino flailing, falling and fluttering around various derelict venues before returning to what seems to resemble the club that she starts in and then finally waking up on an empty beach. Scrolling through the video's YouTube comments (something that becomes all too second-nature when the platform is your day job), there are a lot of viewers citing Sia comparisons which is really interesting. I'd definitely imagine fans of Sia would thoroughly enjoy the trio's music, but not because I think the two acts sound or look particularly similar. But stylistically, fans of one are probably likely to be fans of the other.

I was also dumb enough to pass up on a free Vaults show towards the end of last year, you know, because I'm stupid and shit, but they're playing a few dates across the UK in April so that will probably be nice. Keeping with the whole religious vibe, their London show is at Heaven. Nice work, Vaults.