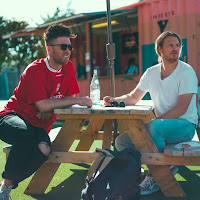 The advantage (there is possibly just the one) of being slack af for a couple of months is that when I do get myself in gear, there's more than one song from super active bands that I can ramble on about. And that's cool because words are hard so having double the songs to write about makes life a little easier. Thanks Frenship.

Lauv is commenting all over 'Carpet' on Soundcloud which is cool because I love Lauv even though he ignores me on Twitter, but it's okay, I can take it. He's a dream and anything that's Lauv endorsed is bound to be equally as dreamy. I quite like songs named after and centred around inanimate objects, so 'Carpet' is a pretty fun idea. I actually thought Frenship were from the UK because I never think about Americans having carpets... I'm sure they do, but it seemed like an odd concept to me; I don't know why. Alas, this two piece are based in LA. I'm also assuming they're a two piece because only two of them are pictured in their ol' profile pictures, but again, I could be wrong.

Frenship are very good and I've been thoroughly enjoying these two tracks a lot. The second of which is called 'Capsize' and it features Emily Warren. She kind of sounds a bit like Tove Lo (she probably really doesn't, but I really like her vox anyway) so that's cool. These two songs are taken from Frenship's forthcoming EP which is thrilling news because one can only assume that after hearing these, it'll most probably be exquisite.