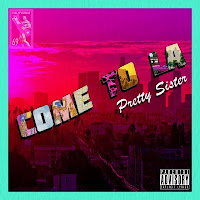 After pressing play on this, it was approximately three seconds before I'd lobbed it into my drafts. Unfortunately it has been idley sitting there for around a month but better late than never, to be quite honest. But look, you can't hit me with that vocal and think I'm gonna forget about your track in a hurry.

So, usually I'm pretty against crude lyrics in songs, for example when ZAYN was all "climb on board" and I was very "no thank you". It just makes me super uncomfortable, things like that are not for me, for real. I didn't realise what was going on during the chorus of 'Come To LA' the first time around, but I added it to my drafts playlist and was like "WOAH WHAT THE HELL WAS THAT" but the more the track went on, the less I cared about the meaning of what they were saying (but in a good way, you know, like I could look past it). Pretty Sister has created such a sophisticated track that the line "Come to LA and fuck me" sounds unbelievably classy. And how nuts is that?! My concern is, when your parents are like "yo what have you been up to" and 'Come to LA' is what you've been up to... how do you share that with them? A minor issue but one to bear in mind nevertheless.

So I've decided that Pretty Sister is just one guy...? I don't know and I don't really have time to do like a load of digging into this, so let's just go with that. But honestly, this guy's voice is my favourite thing to grace 2016 thus far. And I'm genuinely ready to pay for my own plane ticket to LA.