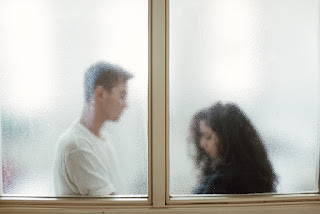 I've barely posted this year (compared to at least once every weekday for the last couple years) yet I feel like I'm giving mad props to artists based Down Under in every post. Which is almost the case considering last week's Remixing Bowl post. I also just spent five minutes Googling what constituted as being Down Under to make sure that term covers New Zealand, and then I fell down an Australasia/Oceania Wikipedia rabbit hole. I bet people who live there don't even understand the difference between those terms. Like how I have no idea what the difference between The British Isles, Great Britain and the United Kingdom are. Anyway, this has been a tangent.

What I'm trying to say is, Wafia is from Australia, and Thomston is from New Zealand and the two of them have come together to create this mellow jam. I'm having a really tough time deciding whether 'Window Seat' is a happy or sad song and my brain gets even more conflicted with every line. It doesn't really matter because together both Wafia and Thomston sound exquisite and they're definitely two artists who I'd love to hear working together more in the future. Although I feel as though this would be unlikely, but we can always hope right?

Also isn't bae of the century Thomston working on his album right now? Won't that be out soon? That's cool with me, to be honest. No doubt it'll be great.