The Return of Saosin: The Silver String, Racing Toward A Red Light 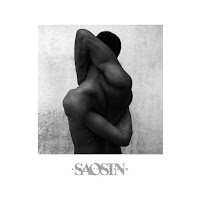 Saosin as an entity are/is/are?is? a bit of a weird one for me because I've never been a huge fan of their music, well what there is of it, but I'm pretty excited for what's to come.

It doesn't seem like a coincidence to me that we're receiving the first bits of new music from Saosin in "seven years". Someone thought about that right? Like "Hey, our most well known song is probably 'Seven Years' and it's been exactly that long since we last put out a record so it all ties in quite nicely." Look, I'm not really bothered either way but I'd be annoyed if no one in their camp had noticed the link. The point is, it's 2016, Saosin are actually back, including their original vocalist Anthony Green, and in a month and a half we'll have a brand new album from them.

In the meantime we've been given two songs to wet our appetite. Looks can be deceiving, as the videos to both tracks were filmed in the same location but I can promise you that the two songs sound pretty different. On both 'The Silver String' and 'Racing Toward A Red Light' it's really interesting to hear the band still sound like they did 10+ years ago but at the same time manage to bring something current and exciting to the table. 'The Silver String' is definitely the "poppier" of the two tracks as 'Racing Toward A Red Light' features some far more technical guitar lines but they don't overcomplicate the song in the slightest. My only concern with the latter track in particular is the amount of vocals that overlap and how Anthony Green is going to pull off those sections live. But I'm sure they've probably already thought about that.