Avid WIIHAMB fans (so... no one then) will be aware that one of my dumb self-constructed rules is not to post songs twice. This is annoying. Especially when a great video comes along for a song that's equally as great and I can't post about it because I said so. Well, not anymore folks, not anymore. 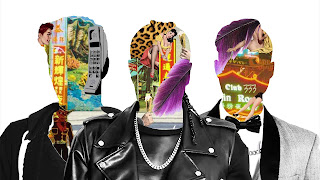 Let me remind you about DiRTY RADiO, a trio whose single 'Numbers' you may have glossed over back in November on the busy lead up to Christmas and end of year lists. The three-piece are from Vancouver in Canada; I've never been there, but it looks really nice on Google Images. They also make music that's a really good blend of R&B, pop and electronic/house danceness. Most importantly, they've just released a video for their aforementioned single, 'Numbers', and essentially I liked it so much that I wanted to post it again.

The video sees the trio hanging out around Philadelphia in the dark looking really cool. For real, if there were awards for musical groups having trendy hairstyles, DiRTY RADiO would win them all hands down. Whilst Shaddy serenades us in the foreground, Tonez and Waspy (were y'all christened with these names?) are handed colourful cartoon instruments to play on behind him. Anything with this much added illustration is bound to catch the eye of most people and keep you thoroughly entertained, especially as I'm fearing for their lives in those back alleys. Overall, 'Numbers' is so fun and is definitely worth both a watch and a listen.