THIS IS IT. Can you hear me screaming? If you can't there is something wrong with your hearing because I am too hyped right now. For real. What a time to be alive. I don't quite know what I was expecting from the fourth and final (proper, we'll pretend the 'Intro' isn't a thing) track from Chloe Latimer's debut EP, but I was not in a million years (well... I mean... not on this EP) expecting this absolute pop banger. Where the fuck has this song been hiding and why have we not heard it until now? 'Teenage Craze' is a certified 5A YAAAAAS. 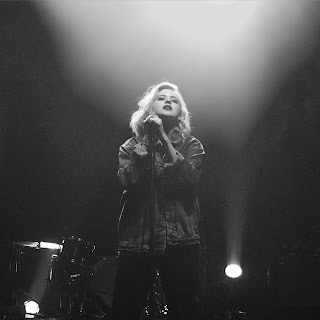 My first experience of hearing 'Teenage Craze' was last Friday night at Koko and my, was that an experience indeed. Kloe live in 2016 is quite different to Kloe live at New Shapes in summer 2015 at her first ever show in London. She's still just as baffled that anyone, even those close to her, are singing her lyrics back and she still exudes an aura of excitement. But 2016 Kloe knows how to own it. 2016 Kloe knows that her songs are excellent and that even on the eve (eve) of the release of her debut EP, also titled Teenage Craze, she has a track for every occassion. So imagine you're front row at Club NME late on a Friday night, waiting for the hits we all know and love, 'Grip', 'Feel' and 'Touch,' and then Kloe metaphorically slaps you round the face with this banger. I was not prepared.


Imagine a song that Popjustice would endorse to the moon and back and that's what you get and more with 'Teenage Craze'. A really feel good pop song written and performed by a Scottish teenager with an immense amount of talent and promise. The style here is almost reminiscent of what we've heard recently from Scandi popstars like Tove Lo, Tove Stryke and Zara Larsson but then the almost "spoken word" section could be straight out of a Charli XCX track. And it's important as a reader of this post that you don't think these are throw-away comparisons, they're an attempt at me trying to put into words how huge this really is. Also, as someone without an accent (a "London accent" isn't an accent and doesn't exist, it's not a thing, I don't have an accent) it's always fun to hear twangs of other people's accents in their songs, and there's a fair amount of that in 'Teenage Craze'. All in all, this song is so fun and I sincerely hope that there's more of this kind of vibe to come from future Kloe releases because it's pure unadulterated gold.


Kloe's Teenage Craze EP is released this Friday, 5th February. You should probably buy/stream it.