I know, I know, I know, I hate these round up things but so much happened this month and I wasn't expecting it because really, who expects anything from January? I've also just been mega slack and lazy and now I'm ill so basically here's everything I did and didn't cover.

(Everything in these here playlists has featured in writing this month, in some capacity. It'll be lengthier next month, I promise, or at least, I really hope so.) 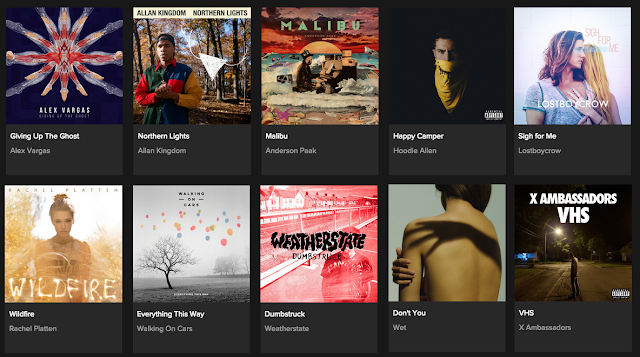 Alex Vargas - Giving Up The Ghost

Vargas' debut EP is packed tightly with radio friendly singer/songwriter, slightly Jack Garratt-esque, tightly produced jams. His vocals are absolutely excellent too and looking back, I think Alex Vargas was probably a glaring omission from everyone's Ones To Watch lists for 2016. I hope he at least releases another EP this year too, for fear of this one falling into the Q1 abyss by the time we reach the  end of 2016.

I don't think I've had as much fun with an album as I have with Allan Kingdom's 'Northern Lights' in a long time. There are a lot of elements on this record that I think appeal to those who tend to only listen to more commercial hip hop artists. The best way I can think of to describe this would be "Fetty Wap with a hundred times more talent but the same amount of mass appeal." [Free Download Alert]

'Malibu' is an album that although I know is really good, I couldn't really get in to and that was a real shame for me. Like, once I got a feel for it, there were a long string of songs I enjoyed but thinking back on the album I can't remember any of them. This is more a case of 'Malibu' isn't for me rather than a case of 'Malibu' isn't an album worth listening to, because it definitely is.

I don't know how cool it is to like Hoodie Allen or to tell people that you like Hoodie Allen. Hell, I don't really know how cool Hoodie Allen is, but I rate this album very highly. After my first listen I actually think I played it three times in a row. That's how into it I was. Also, when was the last time you heard a rapper namecheck The Used's Bert McCracken?! Yeah, thought so.

Lostboycrow - Sigh For Me

It's no secret that I'm not a fan of Justin Bieber's latest album (bear with me) and it's mostly down to the fact that I think there are artists who create music of a similar genre but a hell of a lot better. Lostboycrow is one of those people. His brand of soulful R&B pop is both exciting and intriguing and this is more than evident on his debut EP, 'Sigh For Me', a showcase of the plethora of musical things Lostboycrow is capable of. [Free Download Alert]

I've written an entire thing about this album already and you can read it here.

Walking On Cars - Everything This Way

Okay so I did a bad thing, in that I totally overplayed every single released thus far from 'Everything This Way', of which there are quite a few, so I've actually only listened to this album once since its release. But who needs to listen to an album ten times to decide that it's great? Nobody, because if something is good you know the first time you hear it. Case closed.

This is a funny one, because I actually gave Weatherstate a mildly unflattering review for a live show I saw them play last year in (rad as fuck female led DIY mag) New Roots, but man, this EP isn't half bad at all. Like, I was more than impressed with it, and whilst it's probably not something I'll rush to listen to again, it's definitely a release for all fans of pop punk and general rock to check out.

I'm late to the Wet party and say what you want but rest assured that I am making the hell up for lost time with their debut album 'Don't You'. For real, I listened to it at least three times on its release day. And it's really great alt-pop that I probably wouldn't normally like, but something about the trio is so enticing that I'm just mad into them. I am also probably now going to source a ticket for their UK tour in March.

I was actually quite close to writing a lengthier thing on this album, a la Rachel Platten, but as is ever so common with this blog, I didn't get around to it. I've been a fan of X Ambassadors for quite some time and I can't believe that in the UK we've only just received their debut album. The concept of 'VHS' is interesting too, packed with audio clips between songs, from what I'd like to assume are the bands home video archives, that provide a nice bit of narrative for the album.


For anybody who's interested, I also went to see Adam French and Louis Mattrs, with added Joel Baker, live in January and that was nice. They were all good, but writing about live things makes me super twitchy in a really weird way, like I'm kind of not worthy of talking about it. I don't really know. But there's something I do really want to write about one of those so maybe that will happen soon, maybe it won't. Who knows.


Oh, and Anti? Well, I don't hate it. In fact I liked the majority of it really, apart from the ballad wall at the end. That was awful. Who put that there?