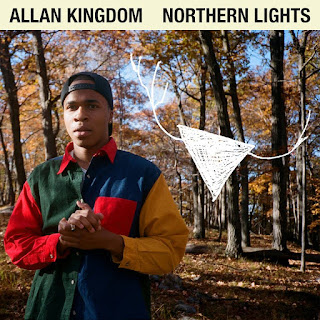 I've been trying to write something remotely substantial about Allan Kingdom for about a month now but I've found it fairly tricky because I don't feel as though I'm knowledgeable enough about hip hop to say anything with any real weight. In the back of my mind, that's not a valid reason at all, talk about what you like even if you have no idea what you're talking about, so that's kind of what I'm going for here.

What follows are six reasons why I love Allan Kingdom.

1) I feel as though a large proportion of us would be lying if we didn't admit that The Brit Awards 2015, almost a year ago now, was the first place we were thrown into contact with Allan Kingdom. Honesty is the best policy and I'm ready to confess that I am not a fan of Kanye West, however, my only takeaway from 'All Day' on that fateful February night was "I disper-er-ersed". There it was, I didn't know it yet, but my love affair with Allan Kingdom had begun because I was now enjoying my first Kanye song since The Good Life (or something as equally pop as that). For real tho, re-watch this and just watch Allan Kingdom.

2) Something that I really like about various corners of the music industry is that age is not a factor. One of those corners is hip hop. I genuinely think it's one of the few genres where regardless of how old you are, if you're good you exist and if you're not you don't. This is relevant because Allan Kingdom only just turned 22. Not only has Kingdom found what I would call "his sound" at such an "early" age but he's got a whole 30+ more years of making rad music for us to enjoy ahead.

3) At the ripe old age of 22, Allan Kingdom already has four mixtapes, an EP and an album with The Stand4rd under his belt. That's a lot of music already waiting to be consumed by you, dear listener/reader. Another great thing about hip hop which isn't as apparent in other genres is that I feel there's far less restraint on when and how music is released. Oh the beauty of a mixtape.

4) Speaking of which, it's probably worth touching on Allan Kingdom's actual musical exports. I couldn't tell you how many times I've listened to his latest mixtape, 'Northern Lights'. And this is really cool for me as someone who isn't generally a massive fan of rap albums, but Kingdom does something that makes he music so accessible to people who are just fans of music. Sure, this is a hip hop mixtape but there are so many poppy/catchy hooks and crazy danceable beats. I can't see you putting this album in front of anyone and them not appreciating the vast majority of it.You can download it for free here.


5) Look how cool he is. There's no better display of just how great of a human Allan Kingdom must be to be around than his new video for title track of his latest release, 'Northern Lights'. The clip sees Kingdom busting out some post-Hotline Bling moves in the snow accompanied by a load of colourful lights. I'd quite like to take him to the club just to see exactly how he tears up the dancefloor.


6) According to Wikipedia, one of his aliases used to be Peanut Butter Prince. Shut up and marry me already.