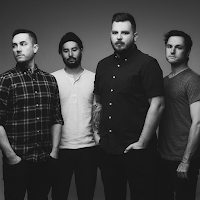 It's May 2016 and we are a mere few weeks away from receiving a brand new album from Thrice. Yes, the Thrice. The Thrice who's second album Vheissu I purchased in Croydon's HMV for £18 after only hearing 'Image Of The Invisible'. It was one of the craziest things I did as a teenager but I don't think it's something that I regret. Thrice's new album is called To Be Everywhere Is To Be Nowhere which sounds super meta, but I'm sure it's all okay. I think that's maybe where Thrice start to lose people before they've even given them a chance, everything seems way more pretentious than it is, which it's not.

Anyway, we have two songs from this forthcoming album which is cool, and they're both really great which is even more cool because there is always apprehension with Thrice and new music, I feel. But there's nothing to worry about because this album seems to be shaping up to be a right good'un.

'Blood On The Sand' is a bit of a slow burner but as soon as that chorus hits, shit kicks off. I reckon this will be great live, especially with that call and response bit before the second chorus as well as the chorus itself. You know what's funny, We Are The Ocean have always cited Thrice as one of their influences but this song in particular really sounds like what WATO were doing on their second album, just executed in a far more polished way.

'Black Honey' is completely different and of the two, it's the one I was instantly drawn to more. There's something that sounds really dark and almost creepy about this track and it works so well. Frontman Dustin Kensrue sounds raw and emotional on 'Black Honey' which excites me about what else we're going to hear on the album because right now, it sounds like it's going to be incredible.

I'm also extremely hopeful for a one off UK show before Thrice play Reading & Leeds this summer.