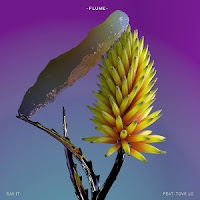 Now when you see Flume featuring Tove Lo on paper, you'd be lying if you said that it didn't look like the song of the year, wouldn't you? Yes, you would.

Well, unfortunately, it may not be quite the song of the year but it's definitely a contender for the top 10. Tove Lo is undoubtedly one of the greatest pop stars on the planet right now with regards to songwriting and performing as well as general personality-wise. I'm also at a point with the Swede where I love absolutely everything that she comes out with. That Nick Jonas single? Didn't really like it. But did I appreciate it for the masterpiece that it was because Tove Lo is queen? Yeah, pretty much.

I'd underestimated Flume prior to the beginning of this new album campaign, however. I firmly believe that 'Holdin On' is one of the finest songs that this generation has seen regardless of genre but the rest of his self-titled debut album didn't really grab me. In hindsight it's probably something worth me revisiting. After 'Never Be Like You', the first single to be taken from the Australian's forthcoming album, and now following up with 'Say It', Skin is probably going to be one of this year's finest records. It's absolutely riddled with collaborations so if Tove Lo isn't enough (she obviously is, she always is), there's also Allan Kingdom, Alunageorge and Beck to name but a few.

'Say It' in particular is just as Tove Lo infected as anyone would expect. I'm really hoping that it gets a raunchy video to accompany it but... I'm not going to hold my breath. Also, sidenote, but Flume is headlining Alexandra Palace later this year which is quite frankly fucking insane. Tickets are on sale tomorrow if you're interested.