If You're Blogging This It's Too Late Part 2: Mura Masa, Rae Sremmurd, Blonde 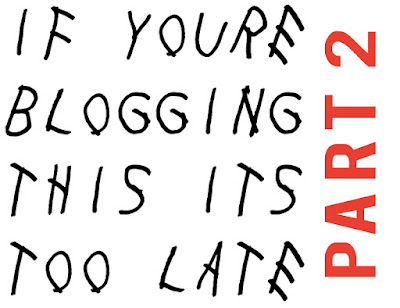 Mura Masa: What If I Go?

"Hold on Natalie, I thought you didn't like Mura Masa?" You'd be correct, I'm not a fan, but that is not about to stop me recognising how excellent this track, in particular, is. And I know it came out totally forever ago but I'm pretty "whatever" about that these days to be honest. I'm also at a point in my existence where I can appreciate that Mura Masa is probably going to be pretty huge in the grand scheme of things that sound a bit like this, isn't he? He also seems to have a right old knack for choosing other artists to collaborate with. Uncredited Bonzai sounds absolutely huge on this track and as "underground" artists who fit this bill go, I don't know who would or could have done a better job. It does however beg the question as to why Bonzai isn't officially credited with the vocals here but there's probably some long-arse label-fiddling reason that I don't really care for. This is good, but everyone already knows that.

Throwback to January 2015 where album releases were scarce and I didn't really know what to do with my time. I downloaded the Rae Sremmud album and absolutely fell in love with how shamelessly fun it was. Sure, the duo aren't the greatest rappers/singers/whatever on the planet but when you have the ability to create a feel-good dynamic album, who cares. 'Look Alive' is the third track we've heard from their forthcoming album SremmLife 2 and it's well good. No, it may not inspire the next generation of scientists or politicians but that chorus is such a mad hook, and to be quite honest "kill this cup, not my vibe."

Yayaya this has been around sixever, but it didn't have a video until just now and you know I don't link directly to Spotify etc because I don't even use Spotify so like, why would I do that? Anyway, so I included Blonde in my Ones To Watch for 2015 but then proceeded to like approximately one song they put out last year. I've also had my own personal qualms with this Craig David comeback, mostly rooted in the fact I don't think any of the new stuff he's done has been that good, until 'Nothing Like This' which I think is probably one of the greatest dance songs we'll receive this year. No for real, mathematically speaking I don't think electronic music gets more perfect than this in terms of verse to hooky/danceable chorus ratio. Absolutely stellar.

Email ThisBlogThis!Share to TwitterShare to FacebookShare to Pinterest
Labels: if you're blogging this it's too late, income tracks