If You're Blogging This It's Too Late, Part 1: Snakehips, Vitamin, Everyone Leaves 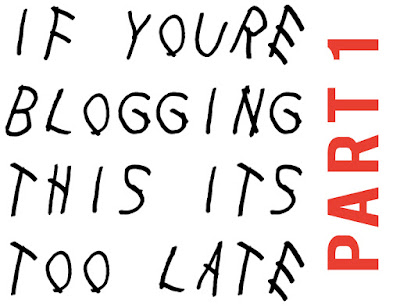 So, I have loads of stuff sitting in my drafts that's starting to get old but they're all songs I really want to post so I'm going to chuck them all out in a couple of posts this week. Wish me luck, please and thank you.

Oh, Snakehips. The duo released a three track EP last month which saw features from both Anderson Paak and Tory Lanez. Personally, I know Anderson Paak is an incredible artist but he's just not for me, which is fine, but leads me to think the title track of the Money On Me EP featuring Paak is just alright. I also think the Tory Lanez track is pretty weak. However, 'Falling' is everything that I loved about Snakehips' 2015 EP Forever (Pt. II) and then some. It's cool that of the three songs, it's the one with a virtually unknown artist that's the absolute banger. I don't know what to describe this "sound" as, but it's what I want Snakehips to do for the rest of ever. It took me so long to get into 'All My Friends' just because I didn't feel like it was very "Snakehips", but 'Falling' is a bridge between that and the last EP and I'm so happy. Also, Malika's vocals are rad on this, like proper good, it's just a shame they're ruined by the fade out. You can't have it all though, can you?

I feel like Vitamin just fell into my life a couple of months ago from absolutely nowhere. It's possibly something to do with their bright and glossy artwork that's caught my eye; does that make me shallow? I'm gonna say no because alongside these pops of colour are really great indie-pop songs, the latest of which is called 'Waterfall'. In terms of cvrrent indie-type bands floating around at the moment, I feel Vitamin are being somewhat overlooked. Maybe they're not, but let's face it, they're better than The Hunna and sound far more interesting than Coasts. Maybe The North just does indie/pop/rock better than we do down here? That seems like quite a fair statement to make. 'Waterfall' is so catchy too. Like there are so many bits in this song that are catchy, not just the chorus. I'm sold. Vitamin are at The Great Escape, which is good, I'll probably watch them.

Yeah yeah yeah, there's nothing fun about having your finger on the pulse all the time, so here's a song from January. You know I wouldn't be posting it this "late" unless I thought it was really good though, right? The more I think about it, the less sense it makes posting a song called 'Seasonal Affective' on the first actual warm and sunny day the UK has seen in 2016, but what can you do? I'm not sure what sub-genre Everyone Leaves would place themselves in, but I'm usually quite picky and pedantic when it comes to bands that sound a bit like this, but I can't stress how impossible to dislike this song is. Both vocalists sound so good and work so well together which is one of my favourite things about this track. It's also just bordering on the right side of sad which is where I like my rock. So majorly stoked on this basically.

Email ThisBlogThis!Share to TwitterShare to FacebookShare to Pinterest
Labels: if you're blogging this it's too late, income tracks