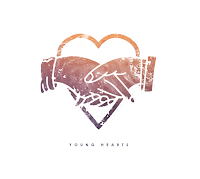 Right at the end of last month Omaha, a five piece rock outfit from the Midlands, released what they're referring to as an LP, and it's really good and I wanted to express that. It's funny actually that a couple months ago I was super irate about posting "rock" stuff in general on here but there's been a fair amount of it since then. First thing's first, yeah, vocalist/singer/frontman/human Jack Voss does quite frequently sound quite a bit like Josh Franceschi of You Me At Six fame, get over it. Glad we got that out of the way.

Young Hearts is the second release from Omaha, the first being their EP Chapters from early last year. This LP is without doubt still a rock record but is so much poppier in terms of vocal hooks, guitar lines and little production quirks. What's great about that is Omaha are exactly the type of band I would have listened to as a teenager, just a sleaker "new for 2016" edition. I'd assume the members of Omaha and I are of a similar age, which is cool because the first two tracks of this release, 'Lowest Of The Low' and 'I Wish' are so reminiscent of You Me At Six, pre-Mumford Deaf Havana and Kids In Glass Houses. What's even better is that apart from maybe the title track, none of these songs feel dated at all; they sound like fresh takes on what those bands were doing eight years or so ago. And that's rad because no one's first favourite band is going to be Gojira. These new UK "gateway bands" like Omaha and like The Gospel Youth are so important and it's cool that these bands exist and are actually good.


Omaha have released two videos recently, well, one was recently and one was not so recently but I guess it all depends on your definition of "recent" a bit, doesn't it? The first of the two, 'Remember' is a fully fledged proper single and although probably five of the seven tracks on here could have been singles, it's a worthy choice. 'Remember' has the pop hook that a lot of rock bands of Omaha's size could only dream of writing. Follow up track, is 'Grey' and it's the complete opposite in terms of... pretty much everything. But having two songs that sound so different yet follow one another so seamlessly is pretty rad. I'd be really stoked to see Omaha live too, because if they're as tight as this release sounds in real life, it's a no-brainer that these guys should be absolutely huge in the next few years.

Buy this and stuff, like I just bought both of the CDs, because CDs are cool and I think this band are well good. You can do the same here.
---
BLOGLOVIN / TWITTER / TUMBLR / INSTAGRAM