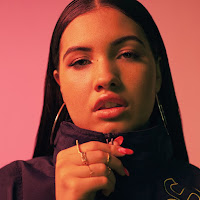 I'm not sure I even really know where to start with this. This post about Mabel was always going to happen this week but I had no idea that Miss Mcvey was literally just about to drop a brand new single too. If the stars have never aligned for WIIHAMB before, they bloody well have done now. But let's take this chronologically.

I went to The Great Escape the other month, I know, I haven't really talked about it much... and on the Friday night I saw Mabel Mcvey live for the first time. It was really great apart from the loud and obnoxious group of tipsy industry types stood behind literally talking the entire way through her set, but that's not Mabel's fault. I'd heard whisperings on Twitter that there was a cover amidst her live show and I can't remember if I'd seen what it was or not prior to Mabel diving straight into Destinys Child's 'Say My Name' but the atmosphere in the room when she did was excellent. Not only are Mabel's vocals perfectly suited to a song like this, there are just enough instrumental adjustments to the track itself "bringing it into 2016".

Also during Mabel's set at The Great Escape she played a song and I was like, "damn, I sure hope this is a single because this is great." And then a couple of weeks ago this (mildly peculiar) video featuring Mabel and the song I'd thought was an absolute belter alongside a collaboration for Tate Modern. This artsy stuff is all well and good, but it's just not for me. However, I have since been reassured time and time again how fucking incredible this song I don't even know the title of is. Obviously it's so cool that an artist like Mabel has seen the opportunity to be involved in a project like this one; but damn this song deserves to be pushed and shoved to the mass market. Which, of course, could still happen but I'm very concerned that it's going to be left behind forever.

But all is never lost because, as I said at the start, Mabel has just put out her brand spanking new single 'Thinking Of You'. It's definitely not my favourite of her tracks, but the calibre of Mabel's music at this stage in her career is so high, pre-listening to it that just gives you some kind of idea as to how good this is. The video is nice too; it's such a stark contrast to Mabel's only other "proper" music video ('Know Me Better' which was all in black and white), the pastels and just generally more fun and warm kind of feeling that comes across from this video is super nice. It's probably fair to say that Mabel is on a pretty nice trajectory upwards from hereon in and it's only a matter of time before she's dominating airwaves across the globe. I'm excited and you should be too.