Reading back on last weeks ICYMI, apparently I thought I was going to switch everything over this weekend... lol. Instead I've been playing Until Dawn. End of year lists are coming together extremely slowly but mildly surely. Other than that, I only went to one show this week and it was to see my sometimes favourites Yearbook and they were lovely. So that's that. Week 48, eh? The end is nigh.

Sunday
What do you mean it’s Sunday night? I don’t care for your facts because Lenno is certainly telling me otherwise with his disco infused ‘Fever’. Lenno is Finnish and a mere 20 years old which all sounds very promising. I’m struggling to find anything about the mysterious Benson whose vocals feature on this track other than that he’s from the UK… but I’m sure he’ll enlighten us when he’s ready. 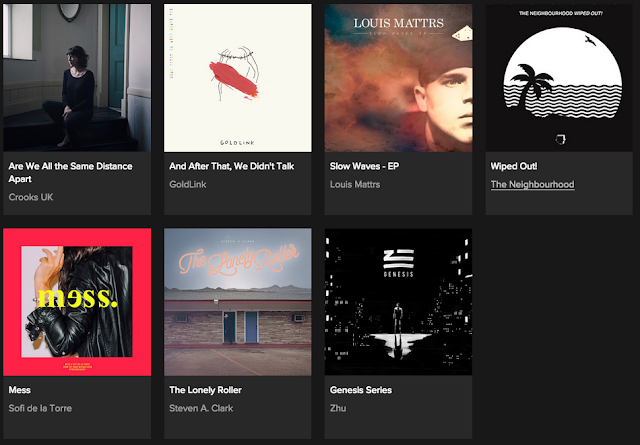 Tuesday
LATE CONTENDER FOR SONG OF THE YEAR. Brace yourselves WIIHAMB fans, brace yourselves. ‘Colorblind Cruisin’ is taken from Sofi de la Torre’s new EP ‘Mess’ and essentially it’s all so totally rad as fuck. Her “thing” is #popdoneright and I literally could not possibly agree more. The whole EP is so great, such a lovely thing to surprise me towards the end of the year, but this track is really really special. According to her Twitter bio it would also appear that Sofi eats burgers, which is cool, because anyone that doesn’t obviously can’t be trusted.


Wednesday
‘Sweet Innocence’ is by far my favourite song from Louis Mattrs’ latest EP ‘Slow Waves’ which was released last week. I don’t know if this is mostly due to the fact that Elli Ingram features on it or not, but look, Elli Ingram is great and we haven’t heard much from her this year, SO THIS GOT ME STOKED. Anyway, she’s not credited and I don’t know why but I’d also quite like to not get into matters (no pun intended) that I don’t understand. In short, this is a lovely little song that I have thoroughly enjoyed hearing over the past week or so.


Throwback Thursday
It’s not a party if there is no Kevin Lyttle involved in said party. Is there actually anybody on the planet who doesn’t rate this song? Kevin Lyttle paved the way for Caribbean artists with dreadfully great songs though didn’t he? Look at Omi flying now. Would he be here if it weren’t for Lyttle? Who knows, but I’m inclined to believe he wouldn’t be. Although, I think if ‘Turn Me On’ had first seen the light of day in 2015, we probably wouldn’t love it a fraction of the amount that we do.


Friday
Kyko is a guy who I had… kind of written off before now. His music was fine but in all honesty I didn't think that it was anything special. Until now. I would assume that Kyko had been sitting on his ‘Animals’ EP, which was released earlier this year, for a while and now he’s in a far better position to make what I would say is far better music. I have no idea how true any of this is, but it’s what I would assume. ‘Pull Me Up’ is a lovely step up from ‘Animals’, and I think it’s a far better showcase of what the London based 19 year old is capable of.


Saturday
‘Gone In The Morning’ is the follow up to ‘Cold Love’, which was Etham’s first single in his new guise. Upon the first listen to this track I was very “yeah, but what’s so special about this?” Three listens later, what is so special is that even though the elements within this song are far from new, piano based sultry R’n’B pop, it has been done exceedingly well here. Purely on the basis of commercial appeal, it would be ridiculous not to tip Etham for big things in the future… maybe not as soon as 2016, but if he carries on like this, it’s not far off.