Welcome to the final What If I Had A Music Blog ICYMI. No longer will these pointless weekly summaries be a burden on anyone's existence. And that's nice isn't it. End of year posts start on here tomorrow, and I don't have a schedule for those yet, so that's probably something that I should draw up today but also probably something that I won't actually draw up today... we'll see. Anyway, that was 2015, this is the end. Goodbye.

Sunday
‘Walk With Me’ narrowly missed featuring on WIIHAMB earlier this year but now that KOA have given the track a new lease of life, it’s come back around and here for all your listening pleasure. KOA’s remix gives the Cosmo’s Midnight song a more commercial dance feel and it honestly works so so well.


Monday
‘No Filter’ comes from New York based producer Black Coast. If WIIHAMB was to have some kind of anthem where the lyrics of a song described what the blog is like, this might be it. That also might be a case of me thinking I’m so much more edgy than I actually am but whatever. “I say what I want when I wanna / say what you want, I don’t give a” all feels pretty accurate. Madison Love’s vocals fit this track so perfectly too - the attitude of Tove Lo but the smoothness of Halsey all rolled into one.


Tuesday
Stoked to come back here in a years time with a huge smirk on my face and for Asha to be absolutely huge. ‘Record Straight’ is the third successive R’n’B smasher that we’ve heard from Asha, and if it’s only up from here, who knows what catastrophic heights that the London based songstress could reach.

I spent some time compiling this totally rad diagram as well as voting in the Blog Sound of 2016 poll and writing about all of that etc. 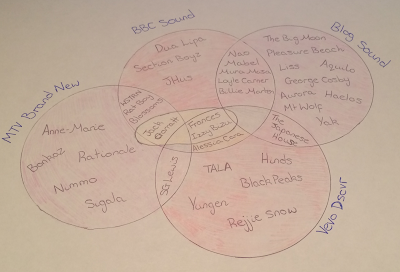 Throwback Thursday
‘F.C.P.R.E.M.I.X‘ was definitely the first mathy/techy track I got into when I started investing solely in rock music, and without it I don’t think I’d like a lot of the rock music that I enjoy today. It was, and still is, the infectious vocal melodies that really grabbed me upon first hearing this song. It’s insane that amongst all of the guitar chaos there’s still something reminiscent of a pop song going on over the top.


Friday
As we begin to attempt rounding off 2015, there’s one thing that sincerely must not follow us into 2016. In light of this, Donna Missal has released the ‘Hotline Bling’ cover to end all Hotline Bling covers. Thank God for that. Surely, surely there is nobody on the planet listening to the frankly God-awful original any more. And to be quite honest with Missal’s version now sitting alongside Alessia Cara’s as just overall far better songs, Drake is essentially rendered redundant.


Saturday
I would love to draw your attention to my mates over at UQ who are doing this TOTALLY RAD AS FUCK Advent Calendar thing at the moment featuring their Class of 2016 AKA artists they think are gonna be even cooler next year than they were this year. Astrid S featured on UQ’s magical mystery tour of cool new things earlier this week and it was my first experience hearing the nineteen year old Norwegian. This is the kind of alt-pop that we love to love, right? I’d love for her to crossover to this whole UK market thing in 2016 like fellow Scandinavian Zara Larsson did this year.


I thought ‘Love Me’, what I’d like to refer to as The 1975′s “comeback single”, was bad. Categorically not good, and I was thoroughly disappointed. I do enjoy the four-piece’s music after all, it’s mainly just their image and aesthetic and “brand” that I don’t get, and I felt that ‘Love Me’ played into that a lot. ‘UGH!’, however, is an undoubted return to form. Unlike their previous single, the song alone is good enough that you can ignore the fact that Matty Healy is parading around half-dressed in the video yet again. More like this for the album please.