Captain Cuts feat Nateur - Love Like We Used To 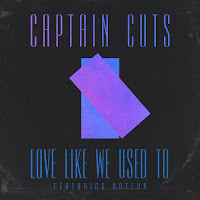 I have no idea what my beef with 'Love Like We Used To' was when it was first released three months ago but I can vividly recall trying to force myself to like it. I first came across Captain Cuts just over a year ago, in fact, I think they were my first post of 2016 with their incredible mid 00's emo and pop punk meets current chart hits. If you've never listened to it, you really really need to, it's mind-blowing and you can find it here. They've actually made a more recent one too, but it's nowhere near as good, so I wouldn't worry about it.

Like I said, I'm not sure why I didn't click with 'Love Like We Used To' at first, but since the release of Captain Cuts' first music video I have found myself well and truly obsessed with this song. It's a bit strange actually, because I'm really not a fan of the video. In fact, post-Blink 182's 'The Rock Show', I'm not a fan of any "here's x amount of money, off you pop to spend it all and we'll just film it or something" videos, and unfortunately that's what this is. However, thankfully my opinions on the music video are not the be all and end all, and 'Love Like We Used To' is an absolute jam. Nateur's vocals and that sing-along chorus are made for "the club" like nothing else to grace electronic music this season. There's no way you wouldn't go wild to this at 1AM after a few vodka sodas, amirite? (I am.)